A year after the pandemic hit, vaccinations give hope to weary Pennsylvanians. 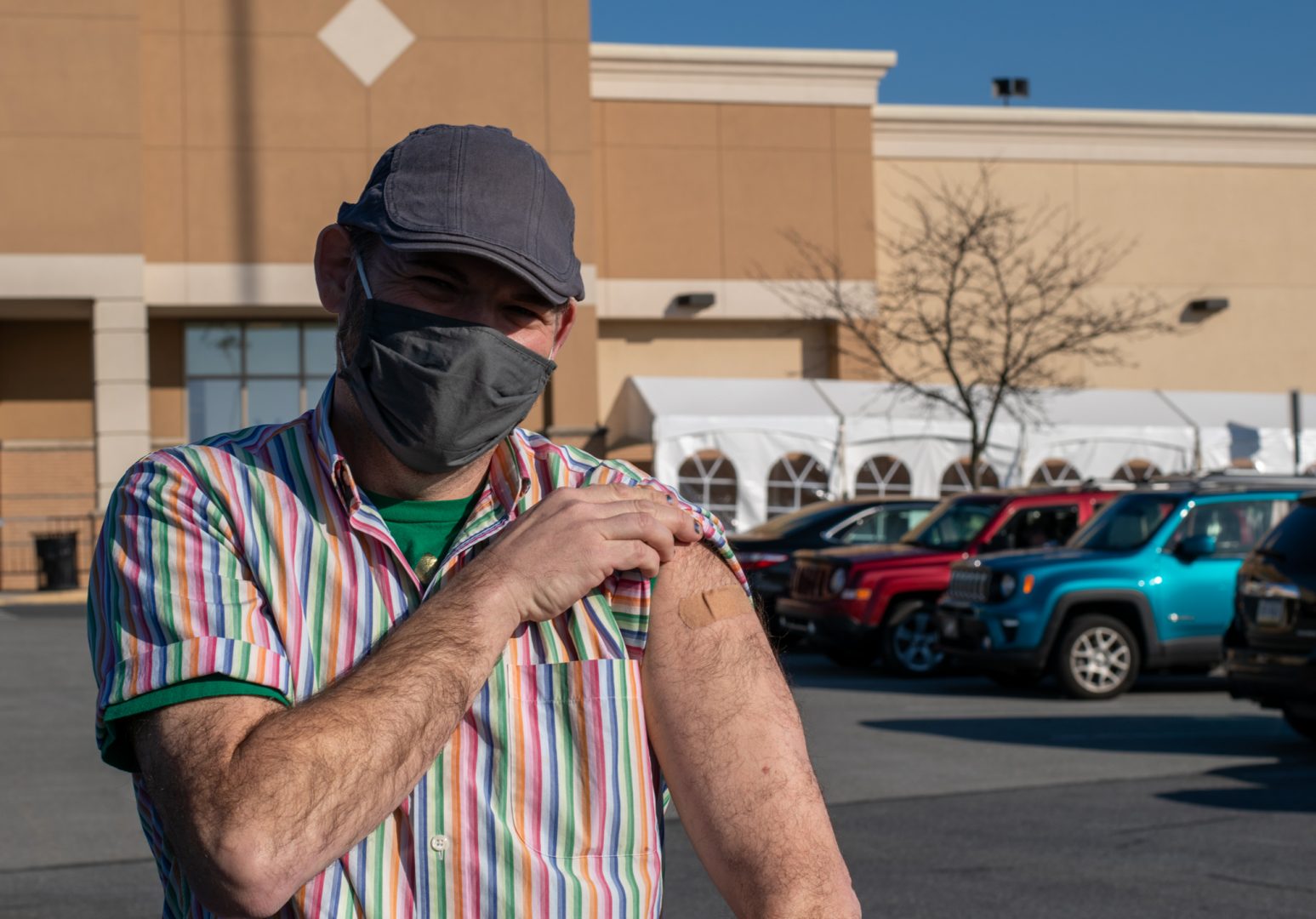 Kevin Woleab shows the bandage where he got his first shot of the Pfizer COVID-19 vaccine. He is set to return in four weeks for his second dose, completing his vaccination.

(Lancaster) — Standing outside the Park City Center mall with a bandage on her arm where she got her first dose of the Pfizer COVID-19 vaccine, Denise Trimby said she feels kind of like she won the lottery.

“I just signed up yesterday — and I wasn’t expecting to get a response so quick — and I am very relieved,” said Trimby.

In one sense, it was a lottery. About 50,000 people have registered with the Vaccinate Lancaster Coalition site that occupies the former Bon-Ton department store. About 500 people, including Denise, were randomly chosen to come in on the first day.

Trimby lives with multiple sclerosis. Missing out on simple things like indoor swimming classes has been the hardest part of the past year, she said.

The 62-year old remembered lining up for a “pink sugar cube” as a kid — the oral polio vaccination, which helped to nearly eradicate the crippling disease in the U.S.

“This is just another era of another pandemic,” Trimby said. “That’s how we can wipe that out.” 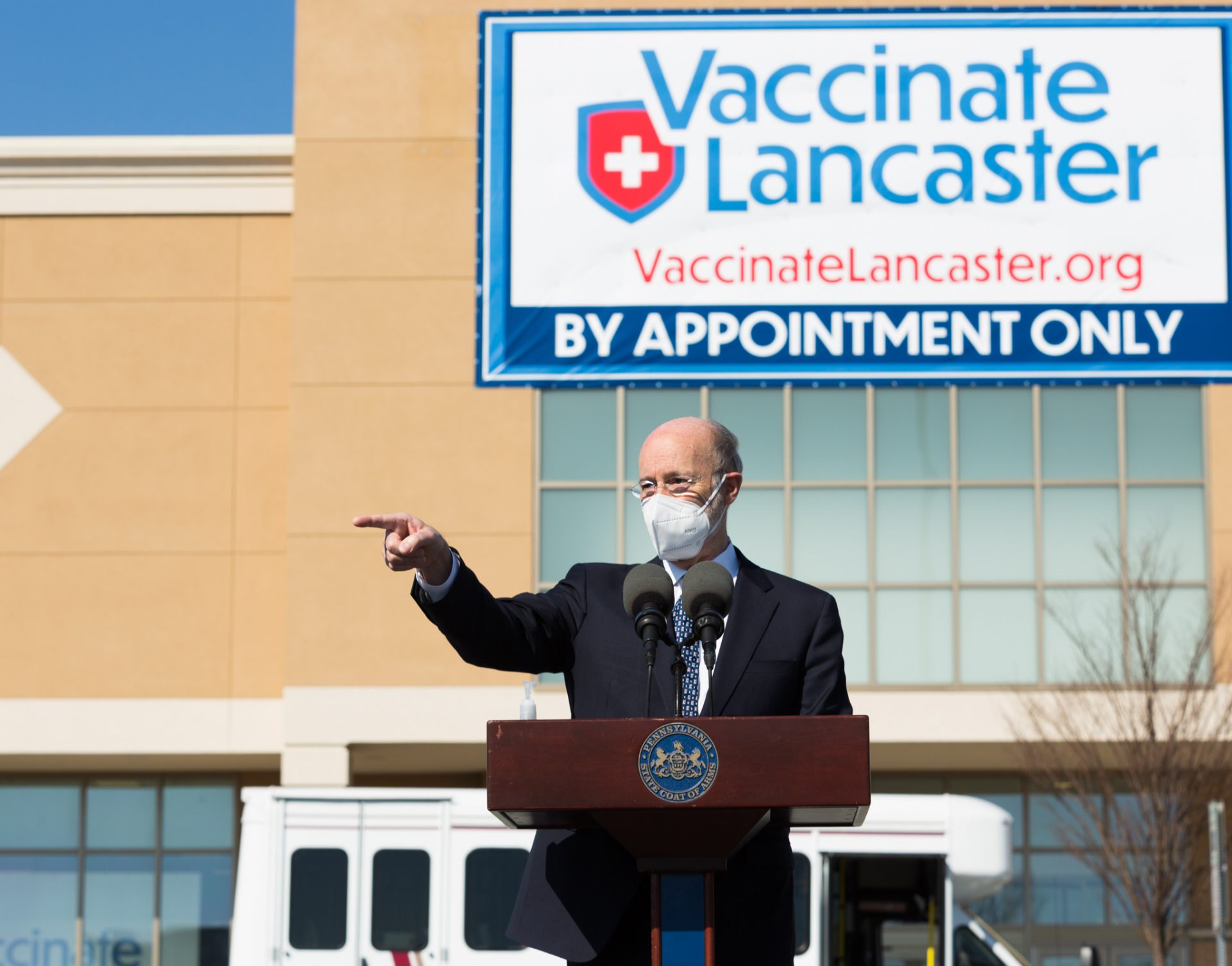 Gov. Tom Wolf speaks to reporters outside a mass vaccination site at the former Bon-Ton department store at Park City Center in Lancaster on March 10, 2021.

In the parking lot, Kevin Woleab said the simple registration at VaccinateLancaster.org was a welcome change from hours spent clicking the hundreds of what he called the “little blue dots” on the Department of Health website.

The 45-year-old, who lives with a medical condition, works at a soybean processing plant in Lancaster County. That job is considered essential, so he’s worked throughout the past year.

For Woleab, the biggest sacrifices have been outside of work. Like millions of people, he and his family have been careful, avoided gatherings, and stayed out of high-risk places such as restaurants.

The increasing availability of vaccines in recent weeks gives him hope that soon, that will change.

“I’m going to go back out to the bars and have some fun,” Woleab said. “Trivia nights and all that with my friends … Just a chance to socialize again — catch up with a lot of friends that I haven’t seen in a year.”

Ray Rynier shouted a greeting from his truck. He said he and his wife registered at the mass vaccination site. She got lucky and was inside getting her first shot. He was along for the ride.

Rynier has been through a lot in recent years. He was hit by a car in 2014, an accident that killed his friend and left him with a traumatic brain injury and post-traumatic stress disorder. Then, in mid-November, he was diagnosed with COVID-19.

A week later, his blood oxygen level dipped into the 70s. An ambulance crew took him to Lancaster General. He said he “almost didn’t make it back home.”

“Being in there, I experienced being around a lot of people that were dying. So I was witness to that,” Rynier said. 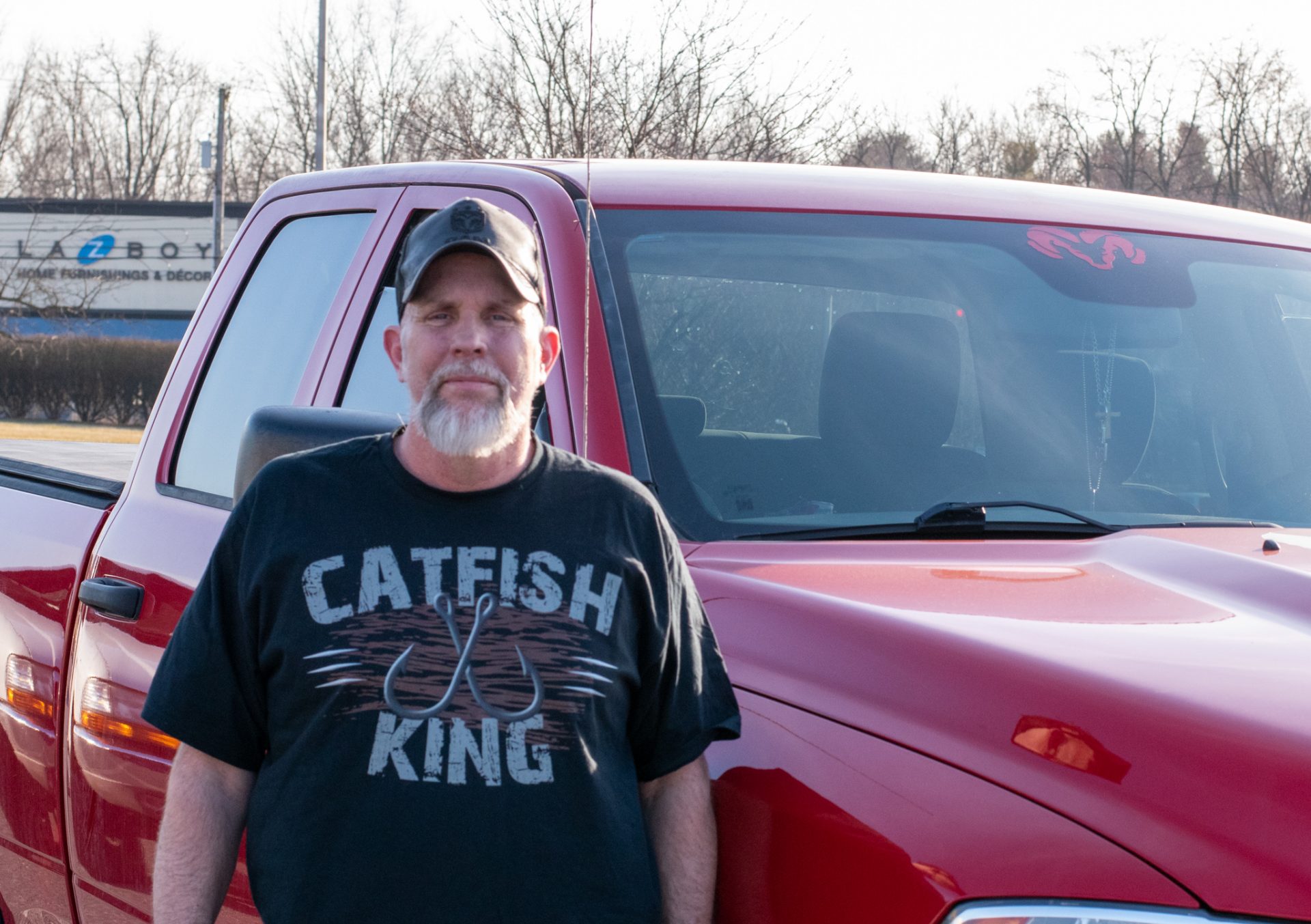 Ray Rynier stands next to his truck while he waits for his wife to get vaccinated at Vaccinate Lancaster Coalition. Rynier says he nearly died from COVID-19 in November. He has registered to get the vaccine.

After an infusion of plasma that contained COVID-19 antibodies, he began to recover. From a hospital bed, he reached his wife on his phone’s video chat app. That was when he learned she also was sick with COVID-19.

Although they both have had the virus, Centers for Disease Control and Prevention recommends getting the vaccine.

Rynier said after a year of curbside pickup, takeout dinners and avoiding public places, he’s not sure if things will ever feel normal again. He was frustrated that the government and drugmakers hadn’t responded more quickly.

Nearly 1 million people have had their full courses of vaccination in Pennsylvania so far, according to the health department. Though that effort started months ago, mass vaccination sites such as this one are promising to accelerate the process.

The need to vaccinate more people each day grows as more vaccines become available. President Joe Biden recently promised enough vaccines for every American by the end of May. In Pennsylvania, weekly allotments of vaccines have doubled what the state saw last month.

witf · Vaccines give hope to people in Pennsylvania

Marcy said the coalition is working to ensure that people have access to the site. He noted that the regional transit authority is providing free rides to the mall from the city, where fewer people have cars.

So far, the state health department has allocated 5,900 doses to Lancaster General to be used at the Park City site.

If the supply increases, Park City will be able to vaccinate as many as 6,000 people each day, Marcy said.