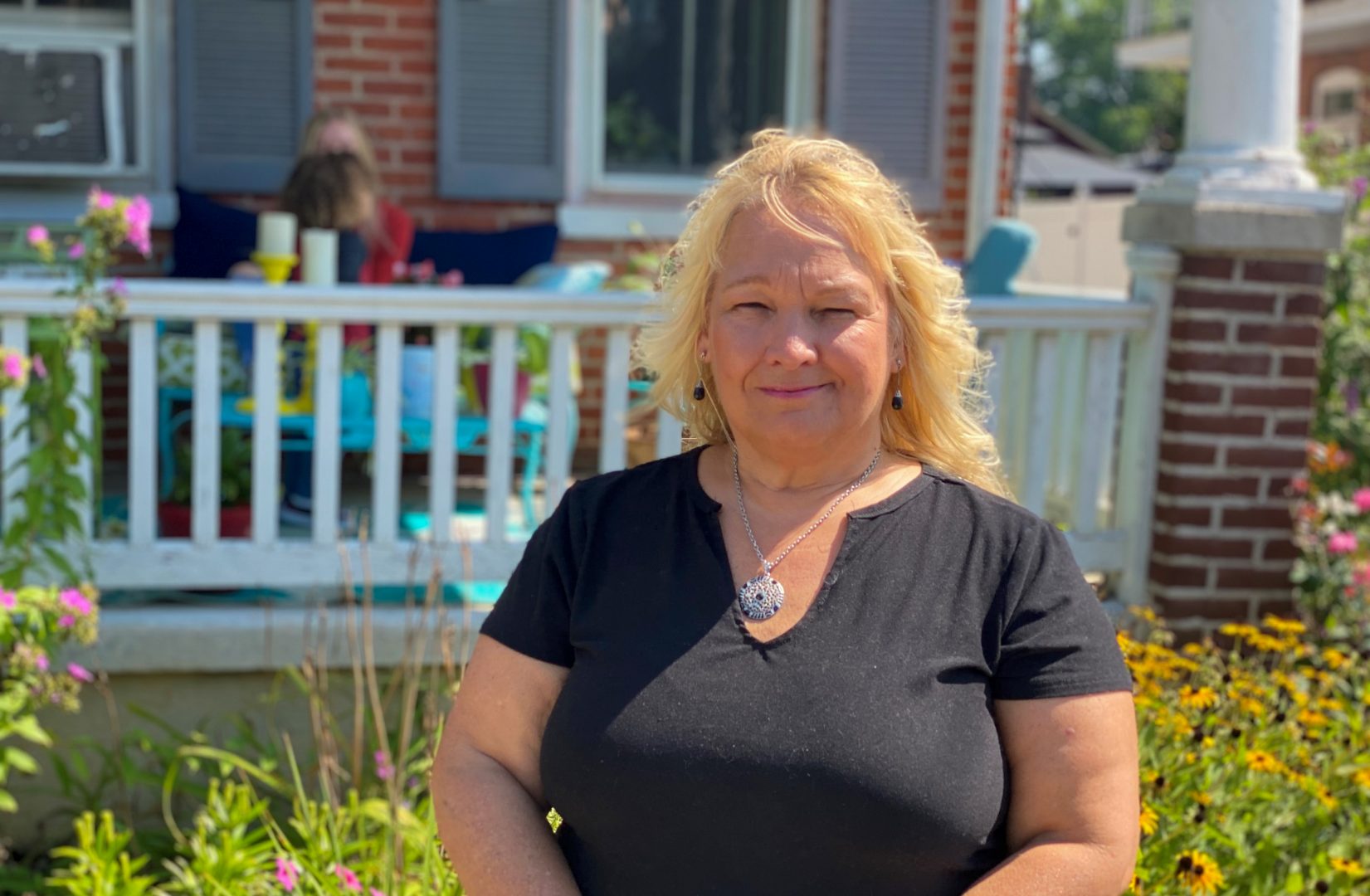 Mary Hogentogler stands in front of her house in Columbia Borough, Lancaster County, on Aug. 23, 2021. She had her house tested for lead paint after her daughter and grandson moved in. The house tested positive.

(Columbia Borough) — Mary Hogentogler bought her century-old brick home seven years ago. It was only recently, when her daughter and her 3-year-old grandson Levi moved into the house, that she decided to have it tested for lead paint.

“I had some peeling paint in the windowsills, and so when they tested it, especially in Levi’s room, it lit up right away that it had lead,” Hogentogler said.

Thankfully, tests showed that her grandson did not have lead in his blood. Now, she and her family are headed to a hotel — paid for by Penn Medicine Lancaster General Health — while the old windows are replaced and any other lead paint is sealed off.

Lead paint was banned in 1978, but it can still be found in older homes. An estimated 91,000 homes in Lancaster County have lead hazards, often from lead-based paint, according to the initiative, called Lead Free Families.

Lancaster County has the fourth-highest rate of childhood lead poisoning in Pennsylvania, noted the health system’s Chief Clinical Officer, Dr. Michael Ripchinski. Lead poisoning is not reversible, and children are especially at risk for the damage it does to the brain, nervous system and other organs.

One reason it’s been so hard to get rid of is that remediating lead paint is expensive — about $10,000 per house, according to Lancaster General Community Health Executive Director Alice Yoder. However, there’s an urgent need for it to be removed.

“The hope had been for many years that there would be more state and federal dollars to removing lead, but the fact is, there hasn’t been,” Yoder said. 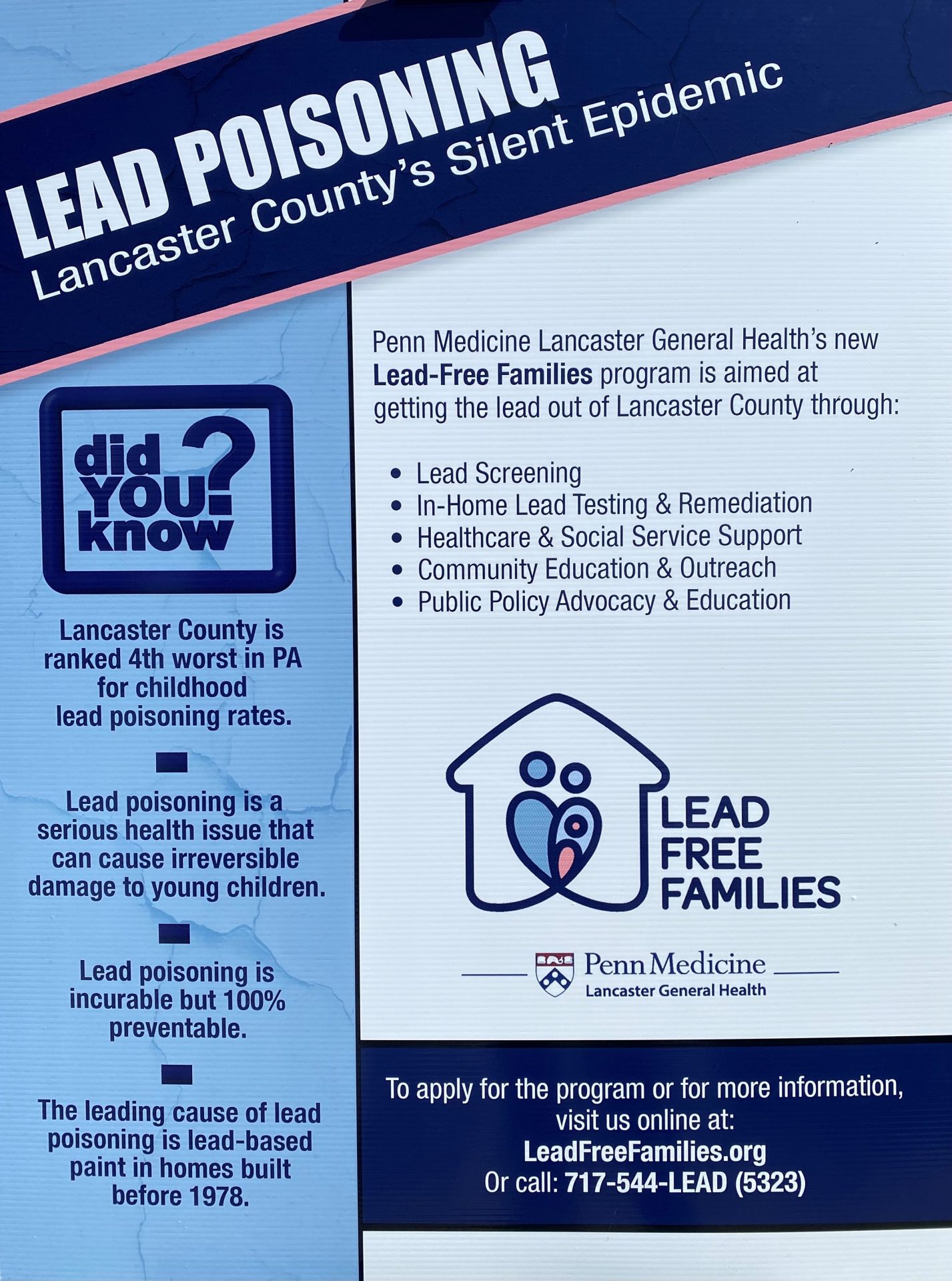 A placard details the problem of childhood lead poisoning in Lancaster County Aug. 23, 2021.

She said the health system plans to spend $50 million over 10 years to get local contractors to do the work. She estimates the money will help at least 2,800 families, including 200 in the first year.

Lancaster County families who earn as much as 400% of the federal poverty line qualify for free home lead paint removal, Yoder said. Additionally, rental property owners can qualify for the program to pay for 90% of lead removal costs.

Penn Medicine’s effort comes during a renewed push to address the problem, which has plagued Pennsylvania for decades, and which disproportionately affects Black and Latino children because it is often found in older, urban residences.

The Council for a Strong America’s “Fight Crime: Invest in Kids” project released a May report indicating that almost 9,000 children in Pennsylvania suffer from lead poisoning each year.

Scientists have drawn links between childhood lead poisoning and crime. For that reason, the Pennsylvania chapter of the group is made up of police chiefs, district attorneys and sheriffs, hoping to prevent lead exposure and other childhood health risks, according to Fight Crime: Invest in Kids Pennsylvania State Director Bruce Clash.

While the lead paint removal initiative is only available to Lancaster County, lead poisoning is a problem across the state, said Clash, who is not part of Lead Free Families. His group recently released lead poisoning fact sheets on Berks, York, Lehigh and Northampton counties.

Clash said some resources are available to people through the PA Lead Free Coalition.

He said his group plans to ask the state legislature to use some of its roughly $4 billion in remaining federal relief funds to provide lead paint remediation and other assistance.

“We just have to ramp up and make the case for it,” Clash said. “And clearly, remediation is going to be a partnership at all levels, and we applaud Lancaster General for this initiative.”