Pregnant and on heroin when a nurse changed her life, she worries others won’t get help

With a budget in question, a program pairing pregnant women with nurses could lose funding. 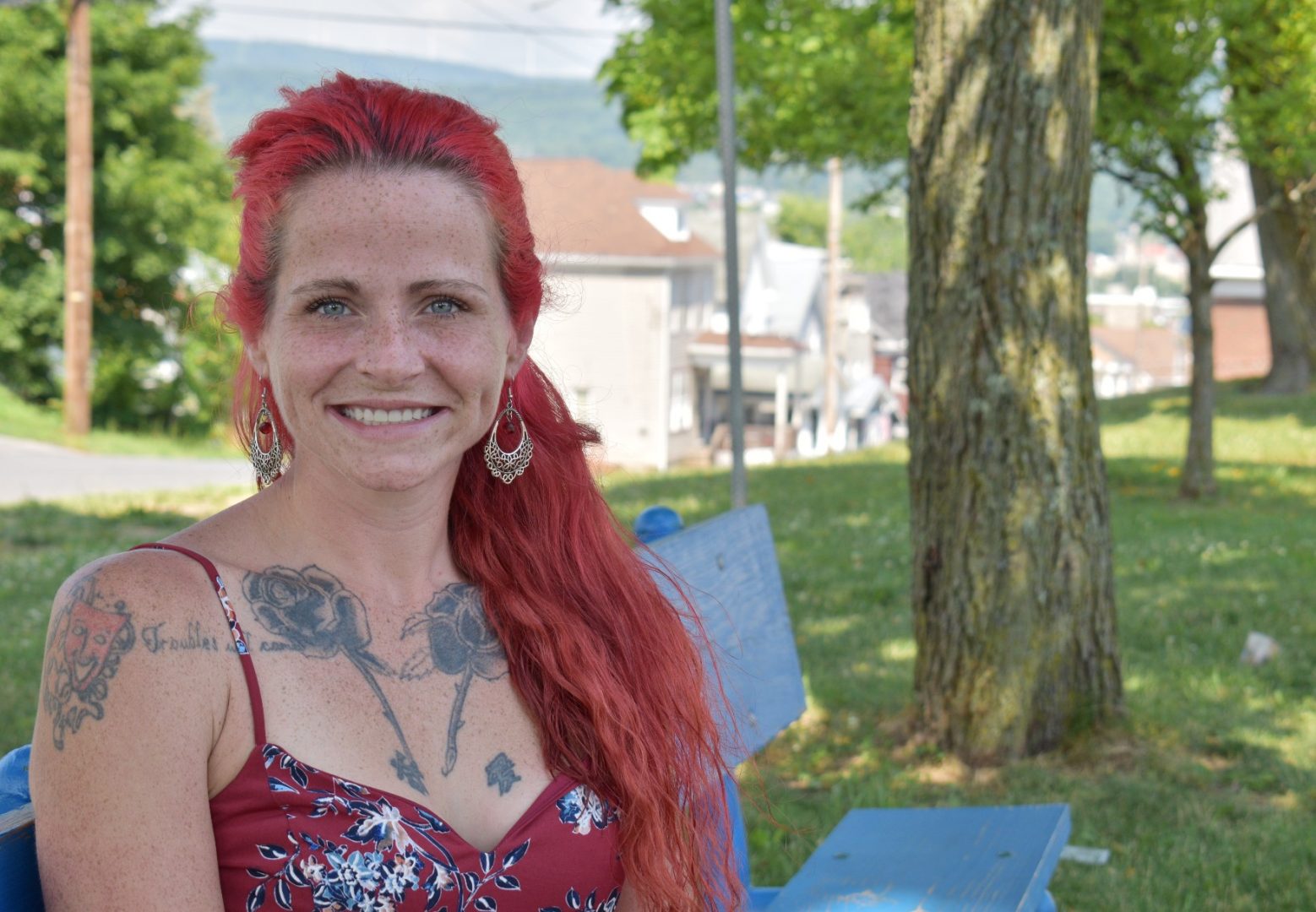 Katie Labus sits in the shade for a portrait at Prospect Park in Altoona. Labus, 31, was addicted to opioids and methamphetamine for 13 years. When she got pregnant, she was able to get help through a nurse family partnership program.

In 2018, Katie Labus was on the run. She had fled rehab, violating her parole. She was back on heroin and methamphetamines. With police in three counties looking for her, she drove to Northumberland County to hide out with a friend who had cocaine.

Still, Labus knew it was a matter of time. She knew what it was like to detox in a concrete jail cell. She decided she couldn’t do that again.

“I had every intention of taking my life,” Labus said. “I thought they were going to give me 10 to 20 upstate. I wasn’t prepared to do that. So I was just trying to do as many drugs as I possibly could to take away my life.”

Labus mentioned to her friends that she had missed her period. She assumed it was the drugs. They suggested she might be pregnant.

“I’m like, ‘No, I can’t ever be pregnant,’” Labus said. “I was told at the age of 15 that I was never going to have kids. I was raped, and it messed up some things and I never thought I could have babies. Well, I did a line of cocaine, I took a pregnancy test, and there that second line came up.” 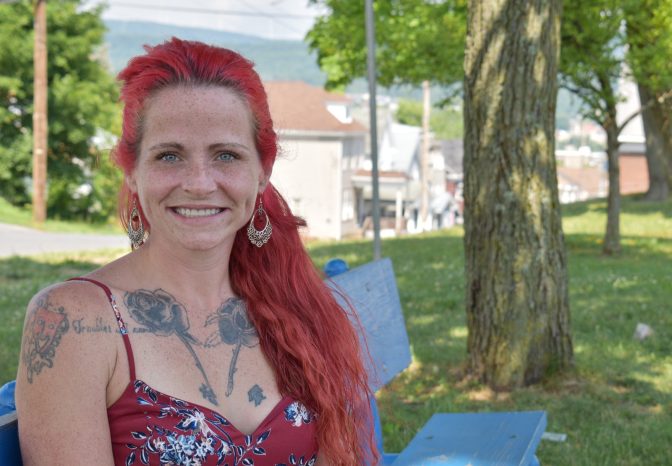 Katie Labus sits in the shade for a portrait at Prospect Park in Altoona. Labus, 31, was addicted to opioids and methamphetamine for 13 years. When she got pregnant, she was able to get help through a nurse family partnership program.

To hear Labus describe it, when she learned she was pregnant, something changed. After not caring whether she lived or died, she felt, at that moment, that she had a purpose.

She wanted to live.

She wanted to have a child.

But at this point, it wasn’t going to be easy.

First, she went back to Altoona, where she had more people she could rely on. She weaned herself off heroin using a low dose of Percocet for a few days. She went to a doctor and got on buprenorphine, a drug that helps people stay off opioids.

Her doctor also connected her to Nurse-Family Partnership, a state and federally funded program administered by health systems and other groups. It is free to eligible women who are expecting their first child. Labus became one of the more than 4,000 pregnant women in Pennsylvania who receive support every year through the partnership.

The model, which connects pregnant women with nurses who do home visits, is about 50 years old, according to Lisa Ritchey. She is partnership program director with UPMC in Altoona. The current funding model in Pennsylvania dates back to former Republican Gov. Tom Ridge, who added a line item specifically for the partnership in the state budget.

However, Ritchey and others say funding to keep the program running is now at risk. The reason is a mix of state bureaucracy and unresolved budget negotiations.

Jessica Lipper, a government affairs officer at the national service office for Nurse-Family Partnership, explained that Democratic Gov. Tom Wolf’s proposed budget includes a $15 million increase to the community-based center line item. That line item is one of three key funding sources for the program in Pennsylvania.

witf · When she was pregnant and on heroin, a nurse saved her life. She shares her story to help others.

Meanwhile, the state Department of Human Services had required program directors such as Ritchey to re-apply for funding, something that periodically happens as part of the state’s review process.

The state Department of Human Services told Ritchey and others they were “conditionally” approved for 2023. That means if the $15 million increase does not make it into the final budget, Ritchey’s program will not be funded.

It’s unclear if the proposed increase will happen, Lipper said. The Republican-controlled state Senate has not passed Wolf’s budget or offered its own proposal. The deadline for the budget is June 30.

If the budget item is cut, 17 counties will have to roll back or eliminate services, Ritchey said. They include western Pennsylvania counties such as Allegheny, Blair, Bedford and Cambria and a host of midstate counties as well, such as Cumberland, Dauphin, Franklin, Lebanon and Perry.

The department says the governor wants to expand home-based services, “and as part of this, we must be sure that partners in this work reflect the varying and diverse needs of families across the commonwealth and that agreements can reflect current goals for services administered.”

“If the Governor’s proposed $15 million is included in the 2022-23 budget, all eligible applicants will be funded, but even without this extension of services, $8 million in federal funding will remain available to support this work,” spokeswoman Ali Fogarty said. “For applicants that were funded in previous years that may not be funded in the 2022-23 program year, the Office of Child Development and Early Learning has provided guidance to those grantees to assist with ending or transferring to other agencies if they are available to serve children and families.” 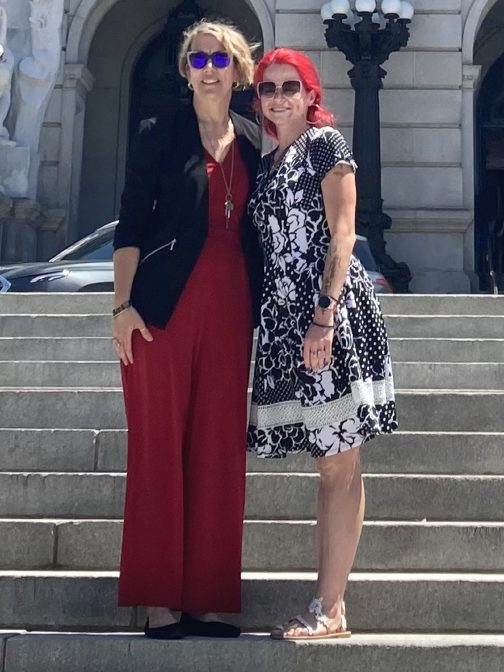 Registered nurse Lynn Watt, at left, stands for a photo on the Pennsylvania state capitol steps with her former client, Katie Labus, at right.

Stuck in the middle are registered nurses such as Lynn Watt. She remembered the first time she met Katie Labus, who was just a few days into medication assisted treatment and about 16 weeks pregnant.

Labus wanted to have a healthy pregnancy, Watt said. “She just kept saying, ‘I want to be a good mom.’ I mean, how can you not want to help someone who says that?”

Watt helped Labus understand her pregnancy and deal with complications as they arose. She also became the point person for the many services Labus needed, such as nutritional advice, drug and alcohol counseling and therapy to address her underlying trauma.

Then, Watt’s plans blew up. After weeks of earning her client’s trust, Labus admitted police in three counties were looking for her.

Watt knew she needed to do something to keep Labus out of jail.

Together, they developed a plan to show the judge she was working hard to stay clean and healthy. Watt wrote a letter that Labus could show a judge. She got others to do the same. She helped her put together a binder of information, making the case that Labus would be better off on probation.

A couple months later, when Labus was seven months pregnant, police arrived to serve her warrant. Labus recounted how stressful it was. She thought she was going into labor. She ended up in the hospital due to what turned out to be an infection.

Then, a miracle happened. At least, that’s how it felt to Labus.

“They released me from the hospital,” she said. “And I was very confused, having three open warrants. Well I come to find out Blair County, Centre County and Lackawanna County all talked to each other. And because I was pregnant they released me.”

A judge reviewed her situation — including that binder of information. Instead of jail, the judge sentenced her to probation. Her son Gabriel was born. He initially had some complications, but today he is a healthy three-year-old. For the first two years of his life, Watt visited him every week through the program.

For Dr. Trude Haecker, President of the PA Chapter of the American Academy of Pediatrics, stories like this are all too common, and show the value of the program. The academy is pushing the state legislature to keep the $15 million line item in the budget.

“From birth to age 5, the number of neuronal connections that are made is astounding,” Haecker said. “This growth is based on social-emotional connections with nurturing adults—parents and caregivers—who are talking, reading, playing and engaging with that infant and young child.”

Today, Labus is off probation after two years. She’s engaged. She works at a local factory. She takes buprenorphine to keep her off heroin. She goes to therapy, and though she is quick to take responsibility for her actions, she says therapy has helped her make connections between her addiction and being sexually assaulted as a child and having easy access to prescription opioids.

Although she’s not in the program anymore, she and Lynn Watt still talk. Watt read a recent text that she saved.

“‘Hey Lynn I just wanted you to know the way you impact me still to this day comes from you being who you are, which I’m sure stems from the father that you had,” the text reads. Watt explained that her father died unexpectedly last year. “I’m sorry about your pain, but I’m here to tell you your dad must be so proud. The proudest father he could be. And who you are today, Lynn Watt, you are truly my hero in so many ways.”