(Undated) — Finding medical care in today’s changing healthcare landscape can be difficult. But can be especially daunting for family members of adults with intellectual disabilities.

Listen to the feature below. 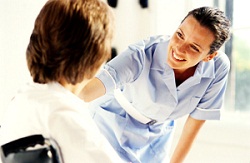 Nearly three decades ago, learning about how to take care of a disabled child wasn’t on Maureen Westscott’s radar. But then the Lititz woman’s third child was born. “I am a parent of a 27-year-old woman with intellectual disabilities, and we have needed various degrees of medical care as she needed significant operations when she was born due to facial abnormalities.”

Suddenly, Westcott and her husband were consumed by doctor’s appointments, medical bills, and thinking about how to get their daughter, Elise, the best care. When Westcott’s husband died at a young age, it was up to Maureen to take over as Elise’s primary caregiver, which she says was daunting.

She especially had trouble finding dental and behavioral health care for her daughter by herself.

“I’ve even had doctors say, ‘No, I won’t treat her because I don’t think I can handle the intellectual disability.'”

Westcott eventually enrolled in county-provided services, and was assigned a supports coordinator, someone who served as the point person when managing all of Elise’s specific needs.

But many adults with intellectual disabilities around the state don’t find such care so easily.

Lisa Tesler, policy coordinator with thePA Waiting List Campaign, says Pennsylvania does have a system in place to offer a wide range of long-term, residential, and community-based waiver programs for adults with intellectual disabilities. “[People can get] assistance to learn how to take care of themselves at home, grocery shop, cook, clean, navigate their way through the community using public transportation, those kinds of things.”

She says certain requirements must be met: A person must have an IQ of 70 or less, and must qualify for Medicaid if they’re interested in certain assistance.

But not everyone who needs services can access them. “It’s primarily a funding issue. There are more than 50,000 people in Pennsylvania that are registered with theOffice of Developmental Programs for Intellectual Disability Services. Of those 50,000, about 25,000 of those get those long-term waiver services. Then we have 15,000 people waiting.”

Tesler’s group advocates for people who are on the waiting list for help. She says it’s broken down into three categories: planning, critical, and emergency, which is the most urgent. “It’s not first-come, first-served. When the state gets funding, they have to look at all the people in the emergency category in the state, and they choose who is at most risk.”

Right now, in the midstate, more than 800 adults fall under the “emergency” category, and more than 3,000 overall are without services.

Family members are often left to schedule appointments and find care for their loved ones by themselves.

Now, it’s up to advocates, like Shirley Walker, to persuade lawmakers these services deserve to be funded. The president and CEO ofPennsylvania Advocacy and Resources for Autism and Intellectual Disabilitieshas a simple argument when making her case at the state Capitol:

“People with intellectual disabilities and autism didn’t cause their condition at all, and we have a responsibility as a society to help those who need help.”

Maureen Westcott in Lititz, Lancaster County is grateful for the help she’s received in caring for Elise.

She’s been able to have her daughter placed into a residential home during the few times her medical needs became too great for Westcott to bear on her own. Now, with Elise back at home, she says life is easier, but she’s still plagued by worry sometimes. “There’s always, ‘Okay, what if my needs get very severe, an accident, a loss of a job? What happens?’ It impacts the other individual.”

But overall, Westcott says she wouldn’t trade her experience, however difficult it may be.

A state budget that’s set to include funding for several types of intellectual disability programs must be passed by June 30th.