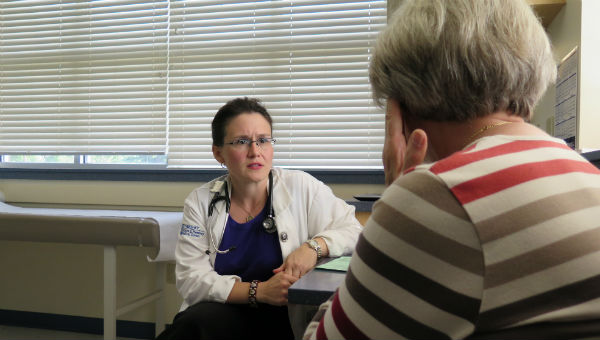 (Harrisburg) — The health care provider shortage is often described as a primary care physician shortage. In all of Pennsylvania, about a thousand areas are designated medically underserved.

But at least two other groups can help provide care to more people.

Physician assistants and nurse practitioners can do almost everything a physician can – like write prescriptions, perform minor surgeries and help out on major ones.

PA’s, as they’re known, could be the future of health care.

The use of physician assistants has exploded recently. The American Academy of Physician Assistants says since 2006, 34 percent more people entered the field. A PA might check in with you at the emergency room, prescribe a medication, or even act as your primary care provider. 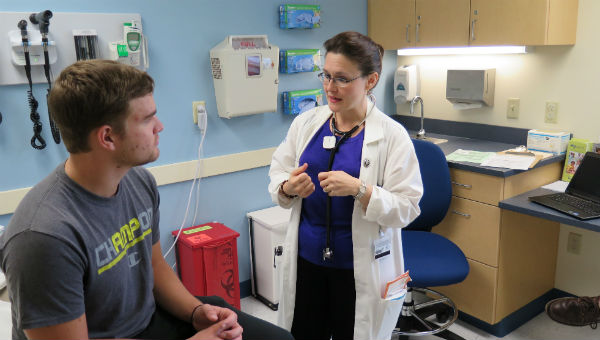 Van Hulle says she typically sees between 15 and 25 patients a day.

Bernadette Van Hulle works as a PA in the family and community medicine division of Penn State Hershey Medical Group. At a clinic in Elizabethtown, Lancaster County, she sees up to 25 patients a day. Just as there’s now a focus to speaking the patient’s language across medicine, Van Hulle puts a special emphasis on it.

“If a patient understands why they’re taking medications, or what their condition is and why that’s occurred, then they’re more apt to being more active in health care. If they feel comfortable talking with me, then they’re going to keep their follow-up appointments. And so, I can take better care of them, and that better helps their family, and that better helps the employer they work for, and it just goes down the line,” she says.

PA’s, and their cousins in the health care world, nurse practitioners, are not the cure-all to the health care professional shortage that includes every midstate county except Union. But they can do about 85 percent of the work a physician can. Because they are supervised by a physician, they always can find help.

“It’s when there’s that fine line that something more critical may happen, or that we’re on the fence about a decision, or we’ve exhausted and run these various tests, and we’re trying to figure out what’s the best for the patient, we then touch base with the physician. And the physician often will say, I would’ve done those same things, maybe what about this, something more that he or she has had experience with that maybe we haven’t just come across,” says Van Hulle.

Nationwide, hospital systems are moving towards using more and more PAs, says Christine Everett, assistant professor at the Duke Medical School. But she notes, some things need be made clearer. 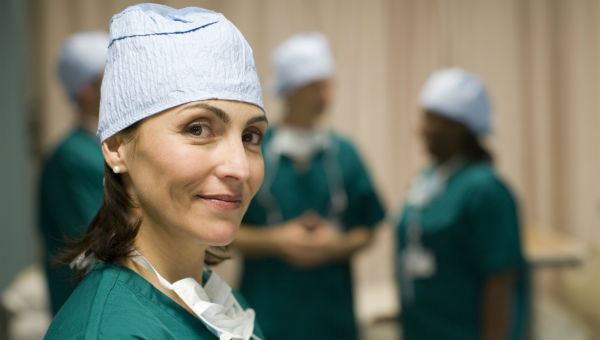 Chris Bruce is director of Penn State College of Medicine’s PA program, and a PA herself.

“A physician assistant is a health care provider and an advanced practice clinician who practices medicine under the supervision of a supervising physician who actually has a really big role to play in the delivery of health care today,” says Bruce.

A lot of work is bundled into those few sentences. First, a PA gets an undergrad graduate degree.

Then it’s off to a PA school or program, which usually means two to three years, with hospital rotations included.

And then it’s time to practice.

They can also work in specialties just like doctors – cardiology, orthopedics, or dermatology are just some of the options.

Chris Bruce recognizes although the profession has been around, PAs haven’t been very visible until recently.

“I think PAs have been contributing to medicine for the last 40 years and I think the contributions are just now becoming better known. I don’t know that the role has evolved as much as really that people are now just more aware of them because there are more PAs.”

In Pennsylvania, four PAs can work under a physician at any practice. The doctor may not be physically present every day, but has to be accessible.

So, how does this fit into the big picture?

“They’re not necessarily taking the work off of the physician because the physician also has a panel of patients, but when you look at it from the standpoint of the practice, that practice is now able to see more patients and serve the community in a better way because there’s more access or ability for people to come in,” saysKaren Jones, chief medical officer for Wellspan Health.