Drop-in centers are a key mental health resource, but some counties lack them

Counties face challenges to getting drop-in centers up and running, and keeping them funded 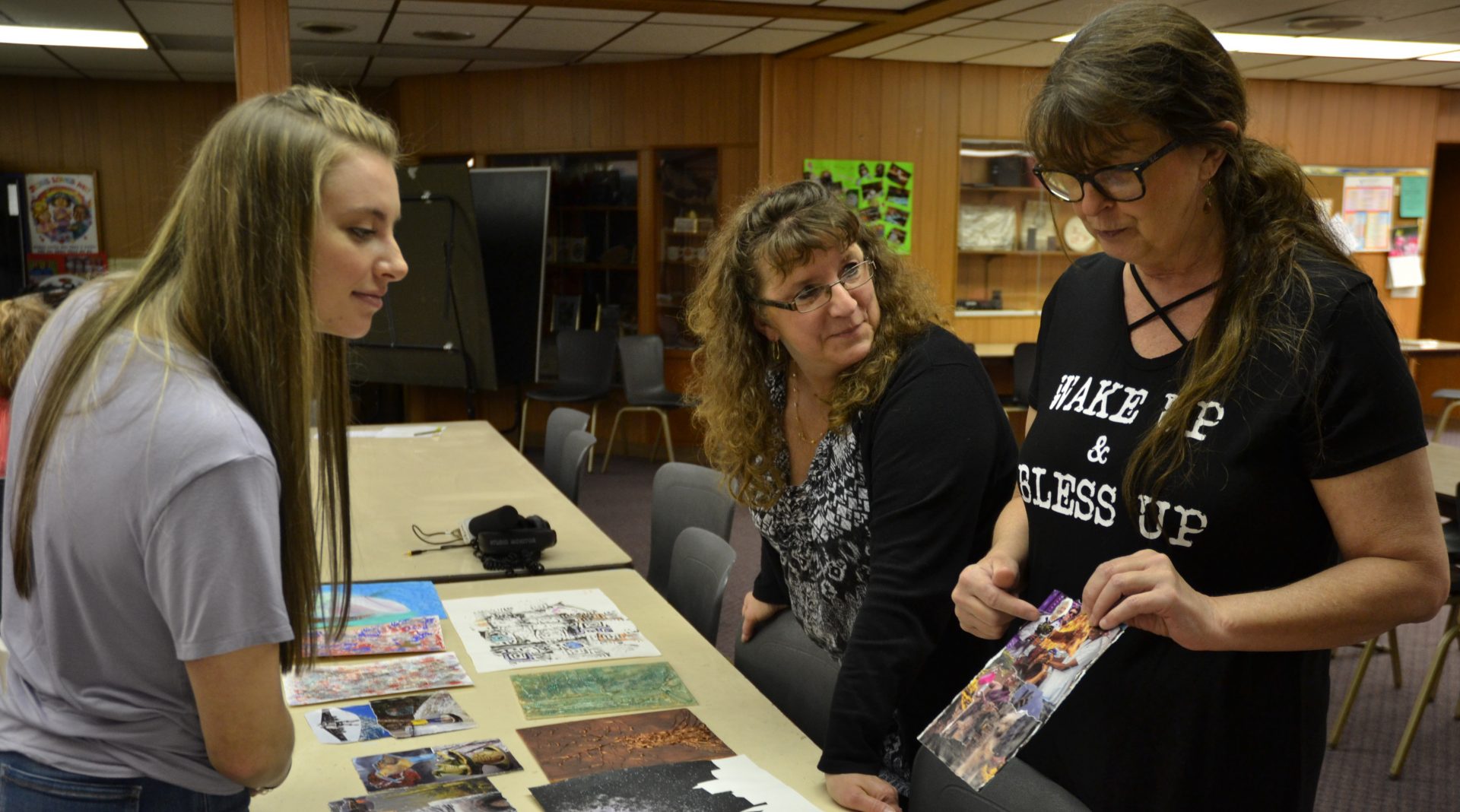 Mt. Aloysius College student Kylee Clawson, at left, and Pamela Townsend, center, look at art made by Jenny Behe, at right. Clawson, a surgical technology major, is participating in the art program as part of a college class. Townsend and Behe each have struggled with behavioral illnesses and work as peer support specialists.

On the Monday afternoon before Easter, about 35 people gathered in the basement of Bethany Lutheran Church in Altoona–some decorating eggs, others sitting quietly at long tables. They sat in small groups, sharing their stories over a meal.

It’s a scene familiar to many who have been part of a church, with one exception: Just about every person gathered there lives with a serious mental illness.

Pamela Townsend is one of those people. In her 30s, she developed major depression and an eating disorder.

Since she helped open the center in 2014, Townsend has led efforts there to provide a safe and welcoming environment for people with mental illnesses.

“We’re not a mental health provider, so they can come here and just hang out for the day, you know, mingle with other people,” Townsend said.

The drop-in center is a welcome alternative to going to an emergency room, Townsend said. It’s also a low-stress option for people who may fear that an ER visit would lead to inpatient hospitalization.

Every week, a mix of familiar and new faces come to the center, Townsend said. That includes people with long-term behavioral disorders, as well as people who may be struggling with the loss of a loved one or another acute life event.

“We don’t make them sign in. And really, they’re people first,” she said. “Their mental health diagnosis is secondary.”

Drop-in centers are common, and they play a vital role in mental health care, according to Pennsylvania Department of Human Services.

“For a fraction of the cost of clinical mental health services, a drop-in center can provide a supportive environment for individuals who might otherwise resort to hospitalization, crisis services or other costly services,” the department said on its website.

However, across the commonwealth, counties face challenges to getting drop-in centers up and running, and keeping them funded.

Pennsylvania has 11 counties without any drop-in centers, according to an analysis of Pennsylvania Mental Health Consumers’ Association data. Those are: Bucks, Centre, Clinton, Forest, Pike, Potter, Schuylkill, Snyder, Somerset, Union and Wyoming counties.

Thirty-eight Pennsylvania counties have only one drop-in center, posing serious challenges for a group of people who often rely on public transportation or case managers for travel.

Of those counties with only one drop-in center, five of them are open two or fewer days per week. That includes Hope Drop-in Center in Blair County, as well as centers in Fulton, Montour, Sullivan and Washington counties.

People in rural counties face barriers to getting to a drop-in center, said Keith Wagner, mental health administrator for Clinton and Lycoming counties. He noted, the drop-in center in Williamsport, Lycoming County, is hours away from towns like Renovo in neighboring Clinton County.

Instead, his county has opted to run a mobile care center that provides services to people who request assistance.

Pamela Townsend stands for a portrait at Hope Drop-In Center in Altoona.

In Altoona, the drop-in center is one great example of how communities can help themselves, said James Hudack, Blair County mental health/intellectual disabilities administrator.

The center costs less money than most mental health programs, Hudack said. Peer specialists like Pam Townsend are paid through a Medicaid reimbursement. The county mental health agency is using funds from its annual budget to help purchase a building, which would allow the drop-in center to move out of the church basement.

There are threats, Hudack said. If lawmakers were to slash Medicaid, it could cut off peer support worker funding. The county mental health agency has also struggled with two decades of flat funding, and a 10 percent budget cut in 2012.

At Hope Drop-In Center, Townsend said her plan is to get the program running five days a week. She worries about paying the bills and keeping the center staffed, but knows it will help people in crisis and potentially save lives.

“It’s really proven that people that access the drop-in center, less of them need to be hospitalized. So they find that support here, which is a really great, great opportunity.”