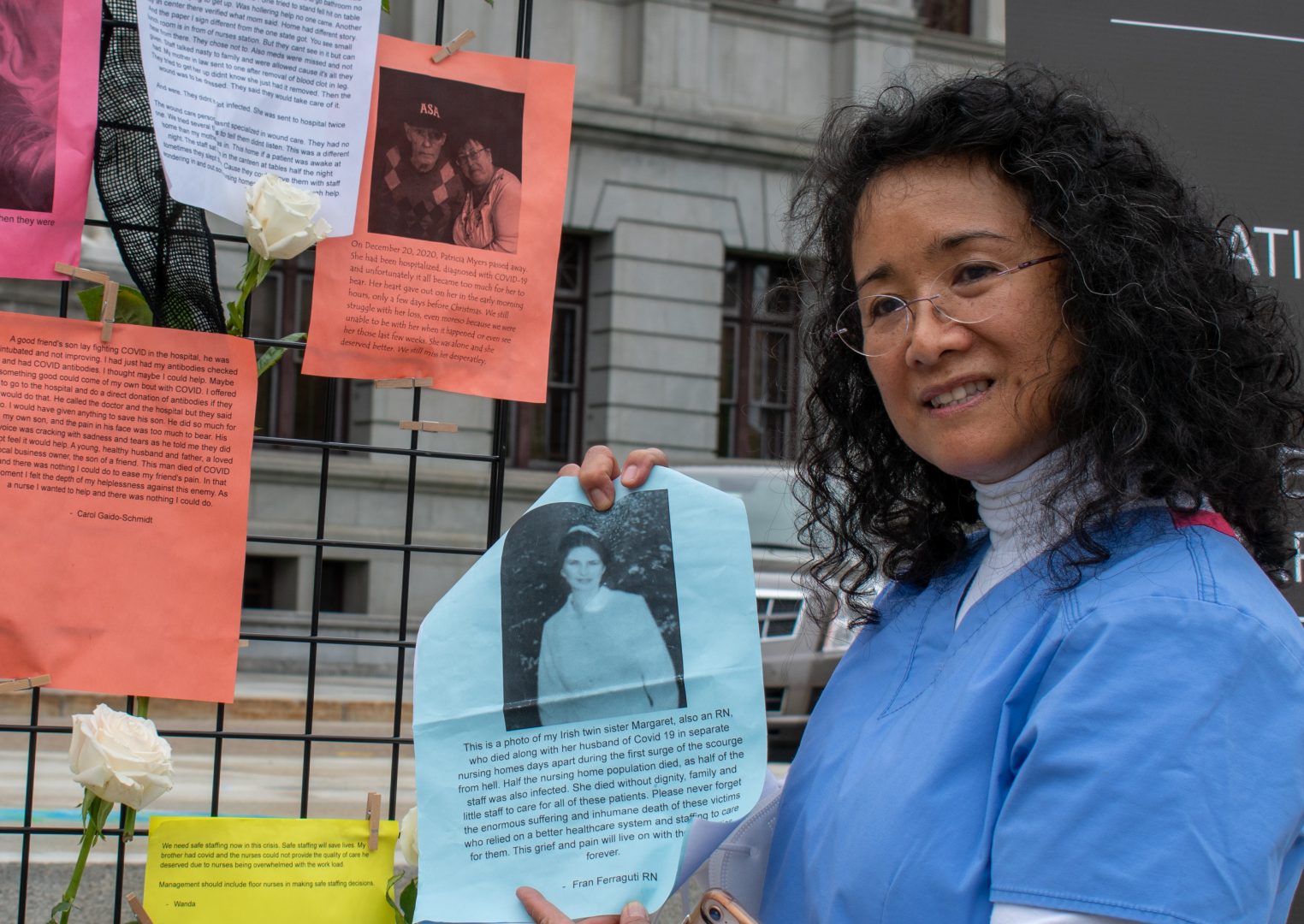 Registered nurse Mary Lou Arocena holds a photo of a nurse who died from COVID-19. Arocena, 60, worked as nurse for 35 years before retiring last year, facing burnout from the stress of the job.

For several years, SEIU Health Care and some state lawmakers have made the case that staffing ratios would save lives and improve patient care in hospitals.

This year, however, nurses came to the state Capitol carrying the trauma of the pandemic, said registered nurse Mary Lou Arocena.

“With COVID, a lot of nurses got burned out,” Arocena said. “A lot of them quit, and sometimes it takes forever for them to hire somebody, because actually nobody wants to work there.”

Arocena, 60, is one of those nurses who got burned out. She worked for a Montgomery County-based health system for 35 years. Last year, after having chest pains and shortness of breath due to chronic stress, she quit.

Now advocating for the union, she said higher staffing ratios will keep more nurses like her from leaving the field despite their passion for the work.

Republican state Rep. Tom Mehaffie of Dauphin County sponsored the House version of the proposed bill, HB 106. He said Republicans and Democrats should be able to agree on legislation that would make patients safer. 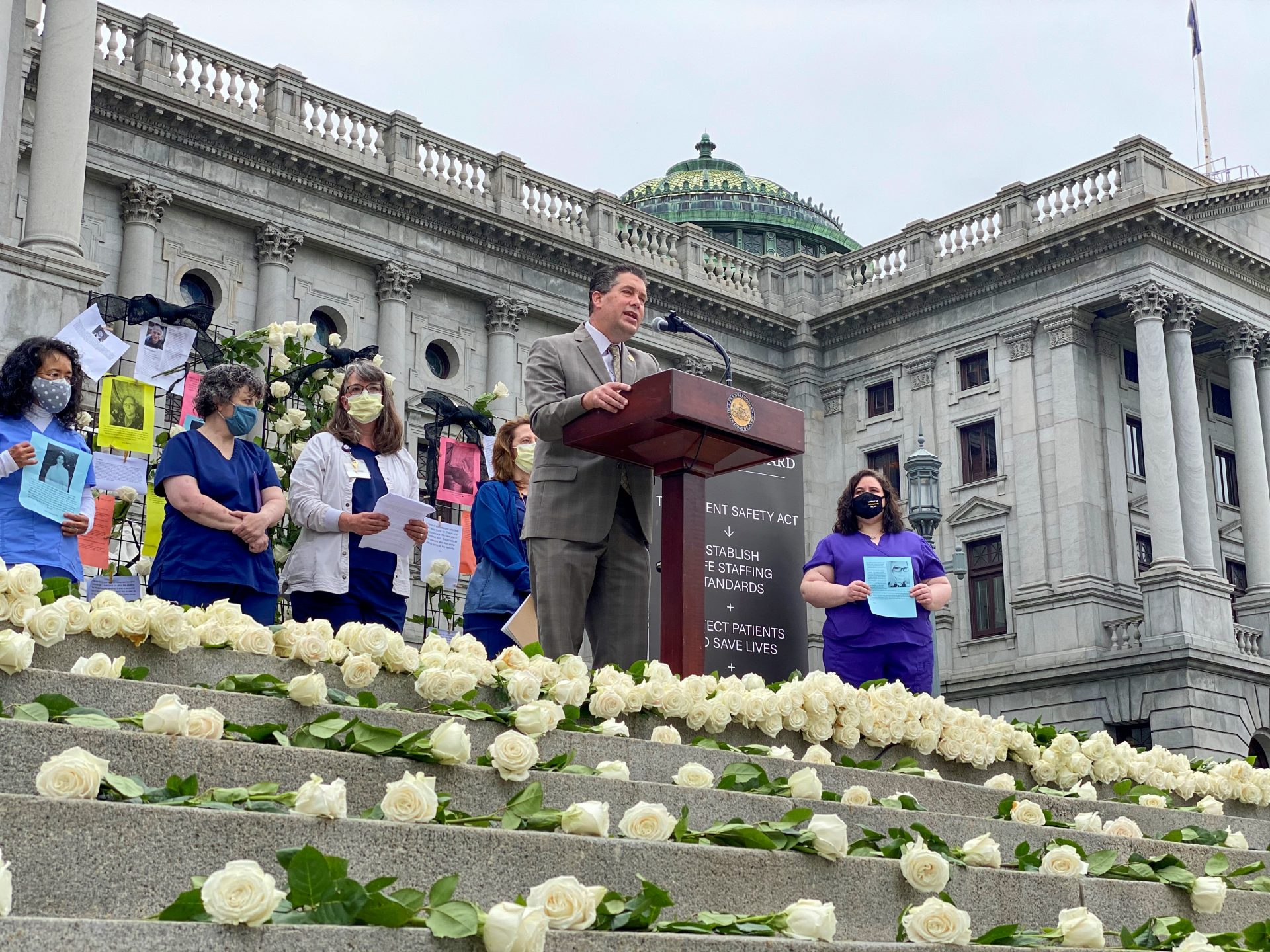 Pa. state Rep. Tom Mehaffie, R-Dauphin, speaks at an event in support of legislation known as the Patient Safety Act, which aims to require a minimum nurse-patient staffing ratio in Pennsylvania.

Not everyone agrees that it would do so. At the Hospital and Health System Association of Pennsylvania, spokeswoman Rachel Moore said there is no clear link between staffing ratios and improving patient care or satisfaction.

“There are lots of reasons only one state in the U.S. mandates such ratios,” Moore said. “Staffing ratios do not create more nurses. There is a national shortage of many types of medical workers, including nurses.”

Moore said the proposed mandated ratios — about one nurse for every three patients, she estimated — would put “a huge and unnecessary burden on hospitals and nurse leaders.”

Pa. Republican lawmakers and the U.S. Capitol attack
As part of WITF’s commitment to standing with facts, and because the Jan. 6 attack on the U.S. Capitol was an attempt to overthrow representative democracy in America, we are marking elected officials’ connections to the insurrection. Read more about this commitment.
State Rep. Kathy Rapp, R-Warren, was one of several dozen state lawmakers who signed a letter asking Congress to object to Pennsylvania’s 2020 election result, without any evidence that would call that result into question. The election-fraud lie led to the attack on the Capitol.

Research does seem to connect lower staffing ratios with a reduction in nurse burnout and better patient outcomes in certain circumstances:

Arocena and her colleagues want the House Health Committee, chaired by Republican state Rep. Kathy Rapp of Warren, to hold an emergency meeting on the proposal.