COVID-19 killed their brother. Misinformation about the virus divided their family.

For some people, grief is complicated by attitudes about the virus among family and friends. 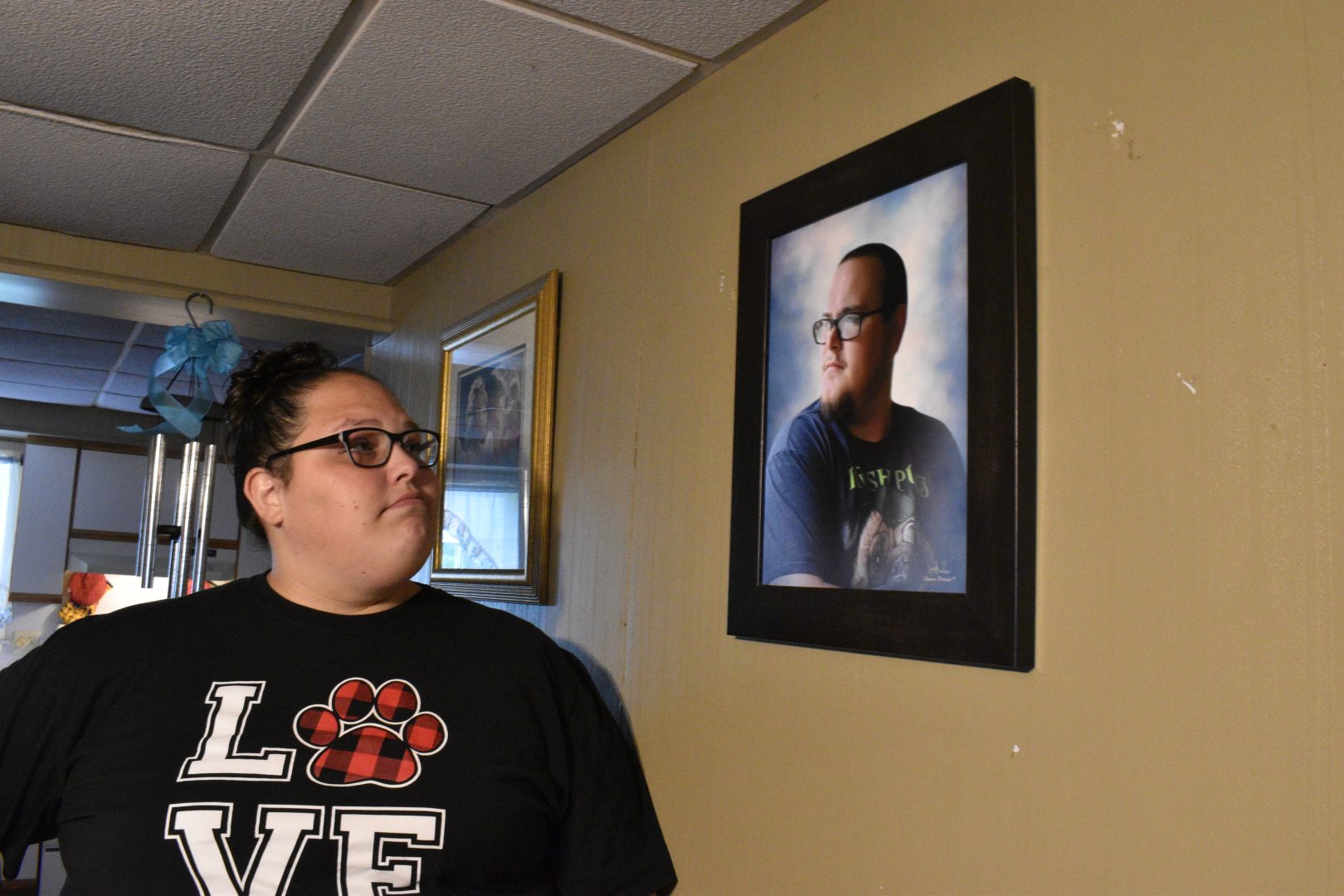 Stephanie Rimel looks at a photo of her younger brother, Kyle Dixon, inside the house Kyle shared with his dad.

(Lanse) — More than four months after Kyle Dixon died from COVID-19, his older sisters found constant reminders of him at the house he had shared with their dad: the tent, canoe and hiking boots that Kyle once used to explore Clearfield County. The grass that he used to mow, grown tall in his absence. The bottles of cough medicine he turned to as the virus began to destroy his lungs.

“Like, I’ll never get to be at his wedding,” Rimel said. “I’ll never get nieces and nephews. I’ll never see him old. Like, that was the last birthday in September we got to celebrate with him.”

Kyle, a state prison guard at SCI Houtzdale, was just 27 when he died on Jan. 20. 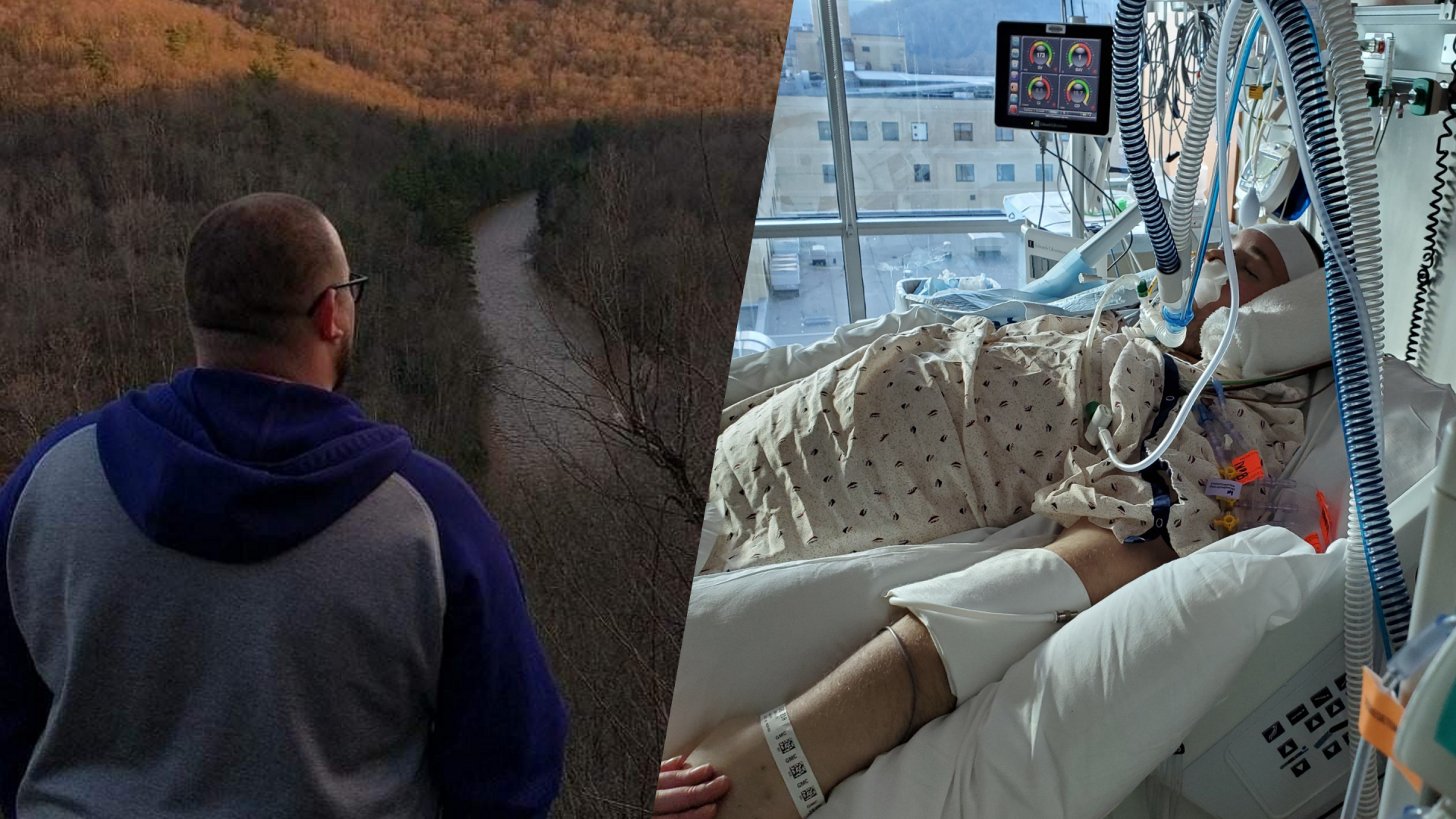 This collage shows Kyle Dixon before he got sick with COVID-19 (left) and in the hospital (right).

That date — the last day in office of former President Donald Trump, who Kyle voted for — isn’t lost on Rimel. She blamed the former president for not telling the truth about the virus to the people who would believe him above all others. She pointed to Trump’s statement in a taped interview with author Bob Woodward, released last year, where he said he was intentionally downplaying how bad COVID-19 could be.

Rimel recounted more falsehoods, including some repeated by Trump, that became mainstays last year: Masks don’t work. The virus is a Democratic hoax to win the election. Only old people or sick people are at risk.

Rimel said her brother believed a lot of that misinformation.

What people believed about the virus split their family apart. Stephanie Rimel’s mom, Cindy Catalano, is a nurse in Pittsburgh, and she began telling Stephanie and her sister Jennifer Dixon about COVID-19 cases in patients. So they had one perspective: The virus is real, and it can be deadly. Meanwhile, friends and relatives in Clearfield County believed otherwise.

Even as COVID-19 ripped through the family, sending Kyle and 29-year-old Jennifer to the hospital, and sickening seven family members in all, false claims around mask wearing and the deadliness of the virus remained.

As Rimel watched her brother’s condition worsen, she listened to her aunt, a QAnon follower, explain that Kyle had caught “a more deadly” version of the virus that had been introduced to prisons as part of a plan to kill incarcerated people. None of that is true.

While Kyle was being put on an ECMO machine — a device that oxygenates a person’s blood, often one of the last stops before death from COVID-19 — another relative bragged about how she couldn’t wait for someone to tell her to wear a mask, “so that she could ream them a new one.”

Even after friends and family saw Kyle’s body in its casket, Kyle’s death hasn’t changed the kinds of things they post on Facebook, according to Jennifer.

“They’re back to posting their same stuff,” Dixon said. “It’s a hoax — that sort of stuff.” 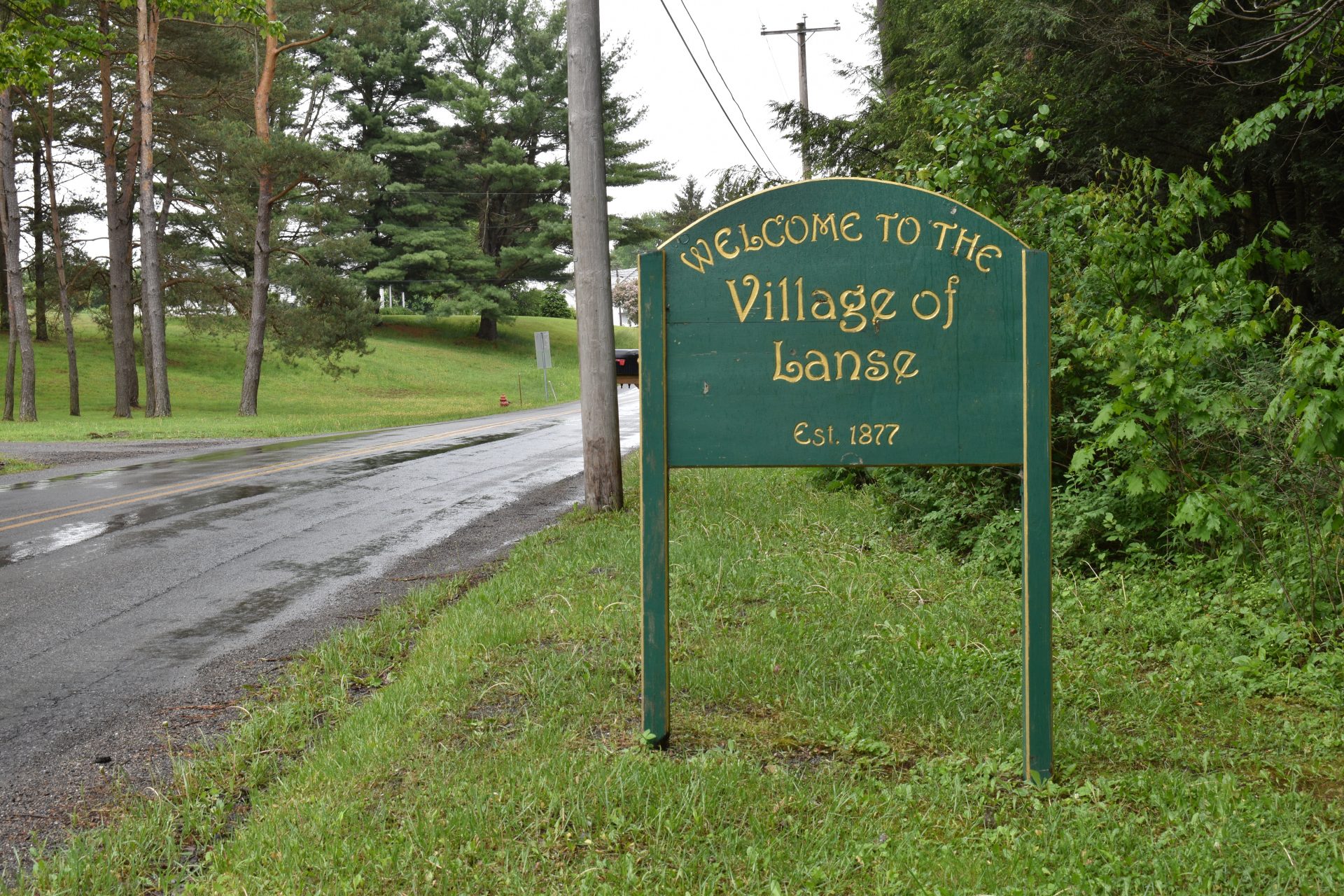 Jennifer has had experience in health care as a patient care technician in Pittsburgh. She recounted the graphic medical details of Kyle’s final days: a tracheotomy tube that “excoriated” his skin. A rash on Kyle’s forehead from where a tube leading into his body was taped. The blood that ran from his nose, and the gauze nurses put in his nostrils in an attempt to stop it.

Jennifer wishes people would understand what Kyle went through.

“I wish that they could have been there his last days and watched him suffer,” she said. “Watch his heart still be able to beat. His kidneys still producing urine because [they were] so strong. His liver still working. Everything. It was his lungs that were gone. His lungs. And that was only due to COVID.”

After his body gave out, Stephanie and Jennifer asked the funeral home to tell people how Kyle died.

His obituary reads: “Kyle had so much more of life to live and COVID-19 stopped his bright future. Please be vigilant that this disease is real and can take a loved one’s life for no reason.” 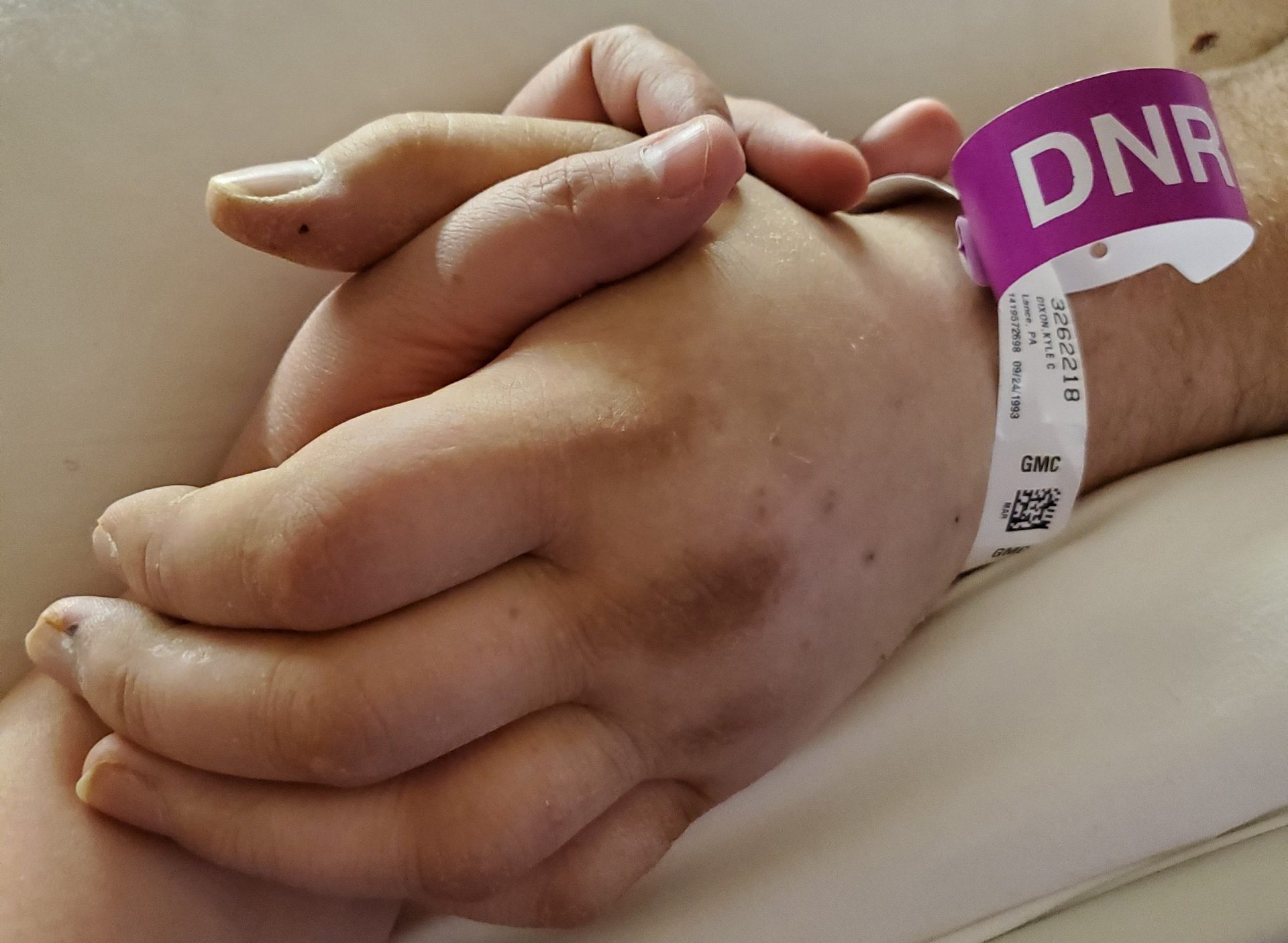 Courtesy of the Dixon family

Kyle Dixon in the hospital.

Rimel said they hoped this message might help others. But while the conversation among COVID-deniers has shifted away from all-out refutation of the virus to conspiracy theories around vaccines, many people she knows are still eager to dismiss the virus.

Often when someone learns about Kyle’s death, Rimel said, she and her family find themselves having to answer a series of questions. Did he have preexisting conditions? Was he overweight? And some people want to know whether Kyle had gotten the vaccine — suggesting that it, rather than the virus, was to blame.

Stephanie said she has no idea how many other people might be going through the same thing but don’t speak up because they fear how family and people in their communities might respond.

According to Funeral Director Mike Kuhn, that concern is well-founded — and it’s playing out in other parts of the state as well.

Kuhn runs three funeral homes in Berks County. He said he had more than 700 funerals over the 12-month period after the virus hit Pennsylvania in 2020. He said, after he saw 100 deaths due to COVID-19, he stopped counting. That was months ago.

Deciding whether to include the cause of death in an obituary is a personal choice, Kuhn said. For every person who tells Kuhn to include COVID-19 in an obituary, there are others who want to bury that fact.

“I’ve had people say, ‘My mother or my father was going to die probably in the next year or two anyway, and they were in a nursing home, and then they got COVID, and you know, I don’t really want to give a lot of credence to COVID.” 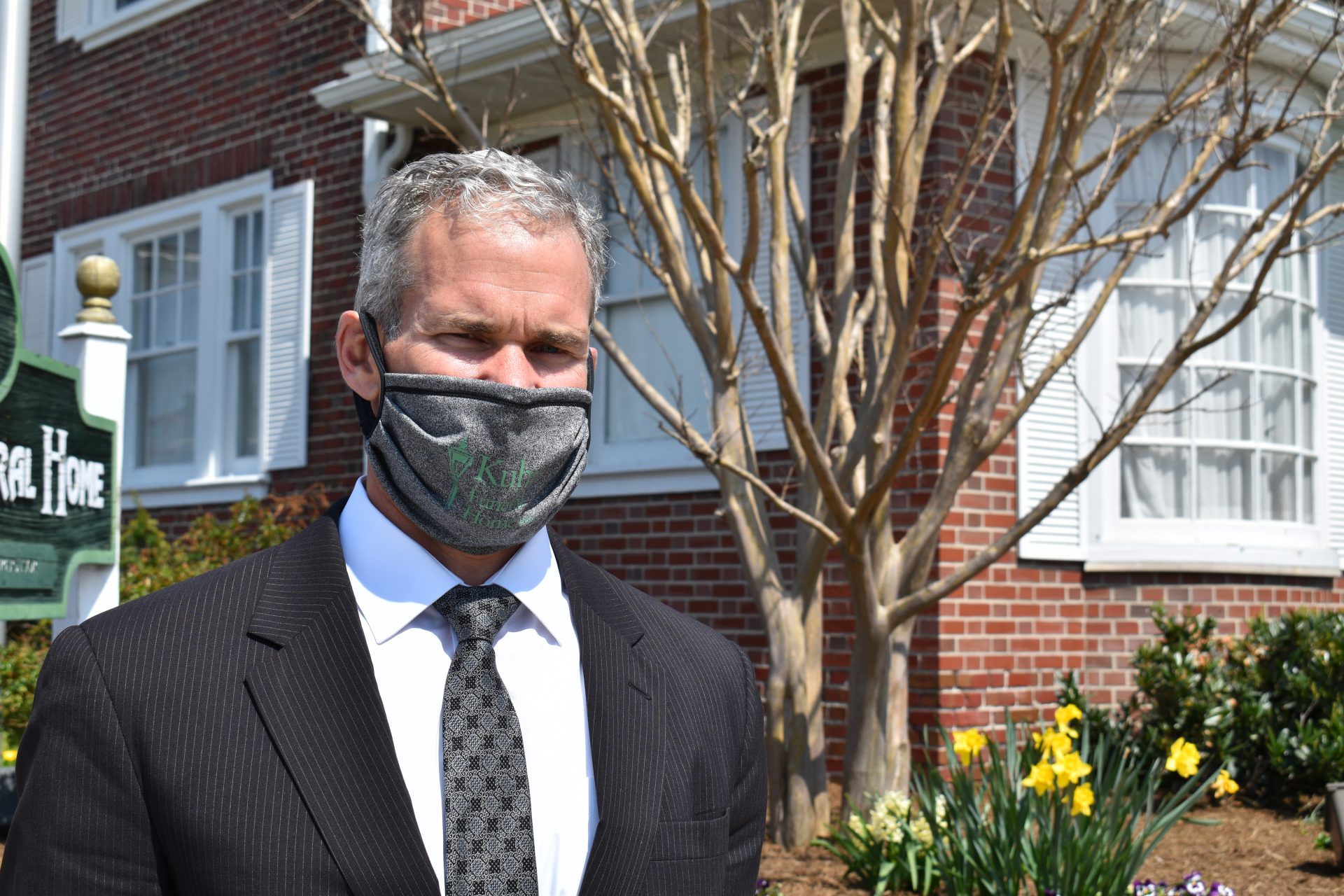 Kuhn said he’s seen people go so far as to beg doctors to change their relative’s cause of death on the death certificate.

His job is to support families, not tell them what to do or be their therapist, he noted. Still, his profession has given him insights into how people grieve.

“And I’m not a grief expert, I run funerals every day for a living, but I would think that the goal with death is to get to acceptance, and to do that requires a lot of work.”

Julia Dunn is a grief expert, and she said there’s a term for what people are going through: disenfranchised loss. Dunn is the clinical director at Olivia’s House, a grief and loss center for children located in York and Adams counties.

A disenfranchised loss is one that’s not widely accepted by societal norms, Dunn said. Her litmus test: Imagine you’re on stage, speaking to a crowd. If you’d feel uncomfortable saying how your loved one died, that’s probably a disenfranchised loss.

Dunn sees it all the time after someone dies from drug use or suicide. A big part of her job is to help children understand what happened, and help parents explain what happened in a non-judgmental way.

With COVID-19 deaths, the dynamic is a bit different, she said. In many cases, it’s not so much that the family is ashamed of how the person died. It’s that, in some cases, they don’t want to admit they were wrong. In some cases, people don’t want to hear others tell them, “I told you so.”

“A family that has lost a loved one to COVID thinks other people might feel superior to them because they didn’t have a loved one die to COVID,” Dunn said. 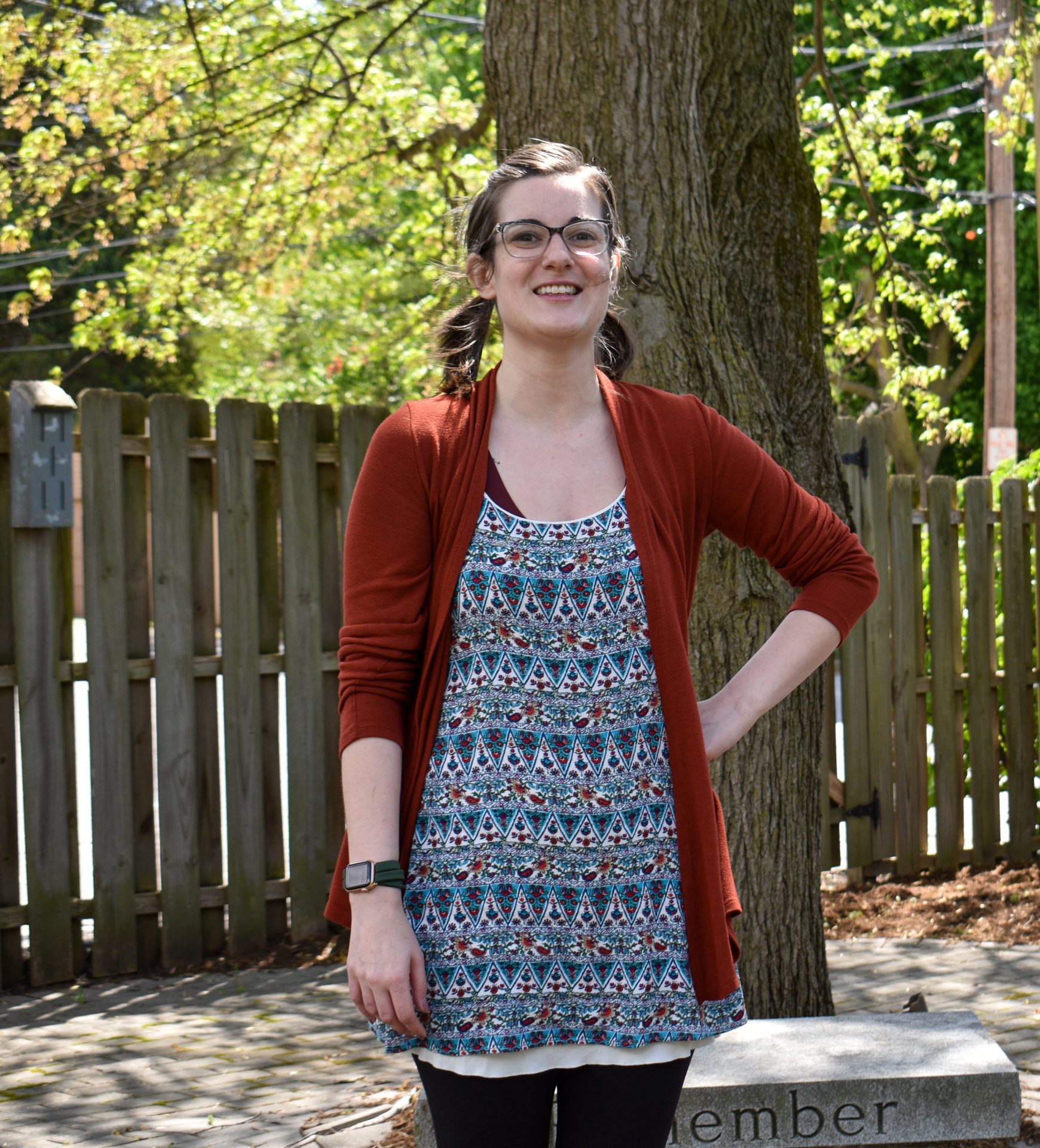 Julia Dunn stands in the back yard outside of Olivia’s House, a grief and loss center for children in York, Pa.

For her, it’s critical that people are able to talk openly and honestly about what happened. That’s something she’s worked on recently in a peer support group, where three of the children present lost parents to the virus. She said people can overcome their loss — but they have to confront it first.

For Stephanie Rimel and Jennifer Dixon, one of the hardest things to confront is the fact that their brother didn’t think the virus was real until he got sick.

But that idea didn’t come from nowhere, Rimel said. And while many have moved on from the virus that killed more than 600,000 people in the U.S., she hasn’t forgotten how the virus was wrapped in misinformation by some of the people in power who could have made a difference.

Jennifer remembered how lonely she was during her own four-day stay in the hospital with COVID-19. Her grief over Kyle’s death is difficult to separate from her anger that her brother had to learn the reality of the virus while alone, and dying.

“There’s a message from Kyle in Messenger,” Jennifer recounted. “It said, ‘I didn’t think this was real. I know it’s real now.’”