With Pa. hospitals desperate for nurses, ‘travelers’ make the best of a bad situation 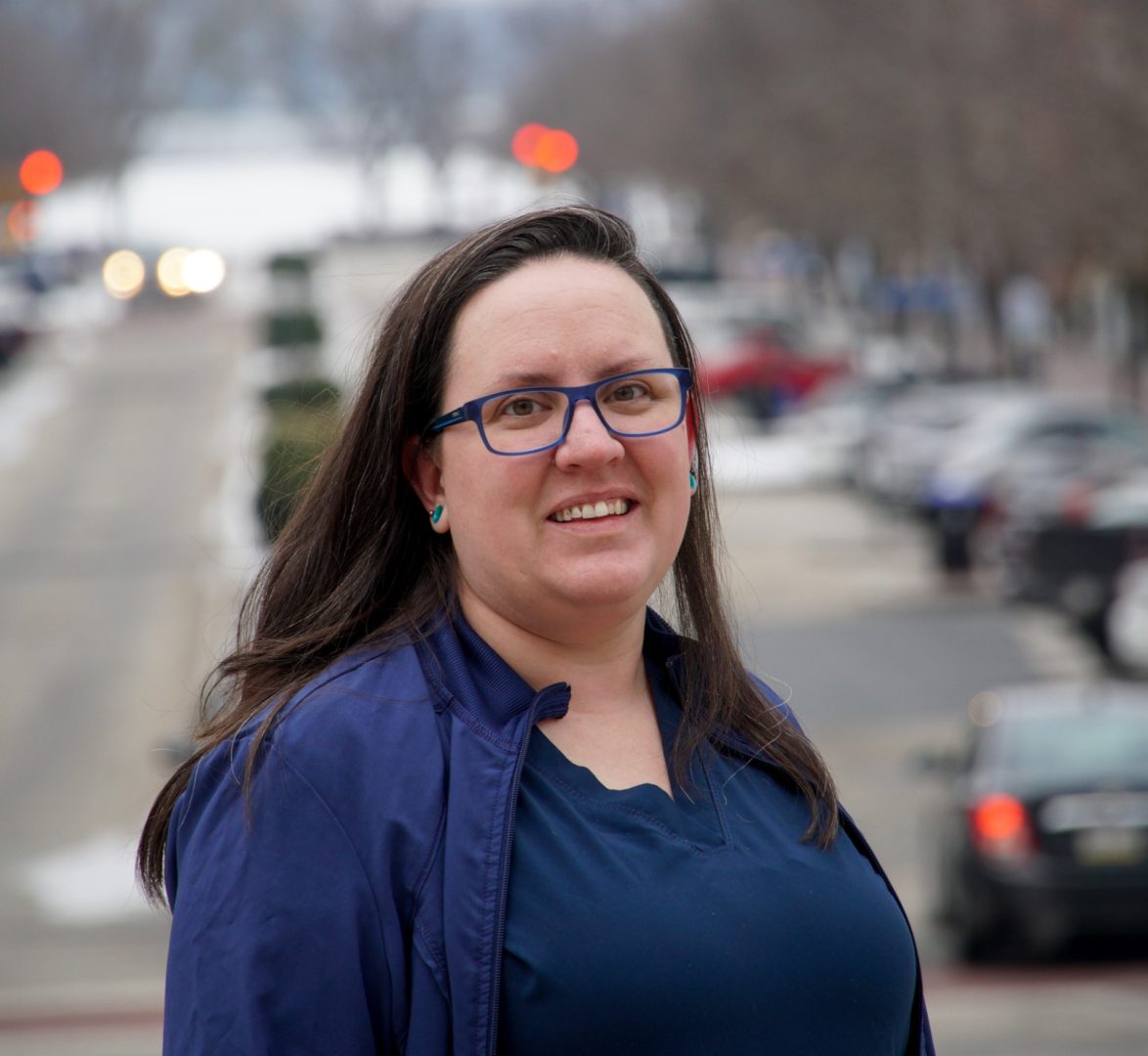 Debbie Vandover stands for a portrait outside the Pennsylvania state capitol Jan. 25, 2022. Vandover, a WellSpan Health travel nurse, came to the capitol to support a bill that would require patient staffing ratios.

(York) — Debbie Vandover can still remember the kindness of the nurses who cared for her dying mother 14 years ago.

The 38-year-old from York, who has a philosophy degree, was considering advanced study in bioethics about six years ago when she decided instead to become a registered nurse — to help others, like the nurses who helped her mom.

Vandover loved being a staff nurse and never imagined that would change. But there was a lot she never could have predicted.

Those attacks, she said, were the final straw that made her want to try something new. “Because if I’m going to get yelled at, screamed at, accused of all these things, then I might as well get paid more for it.” 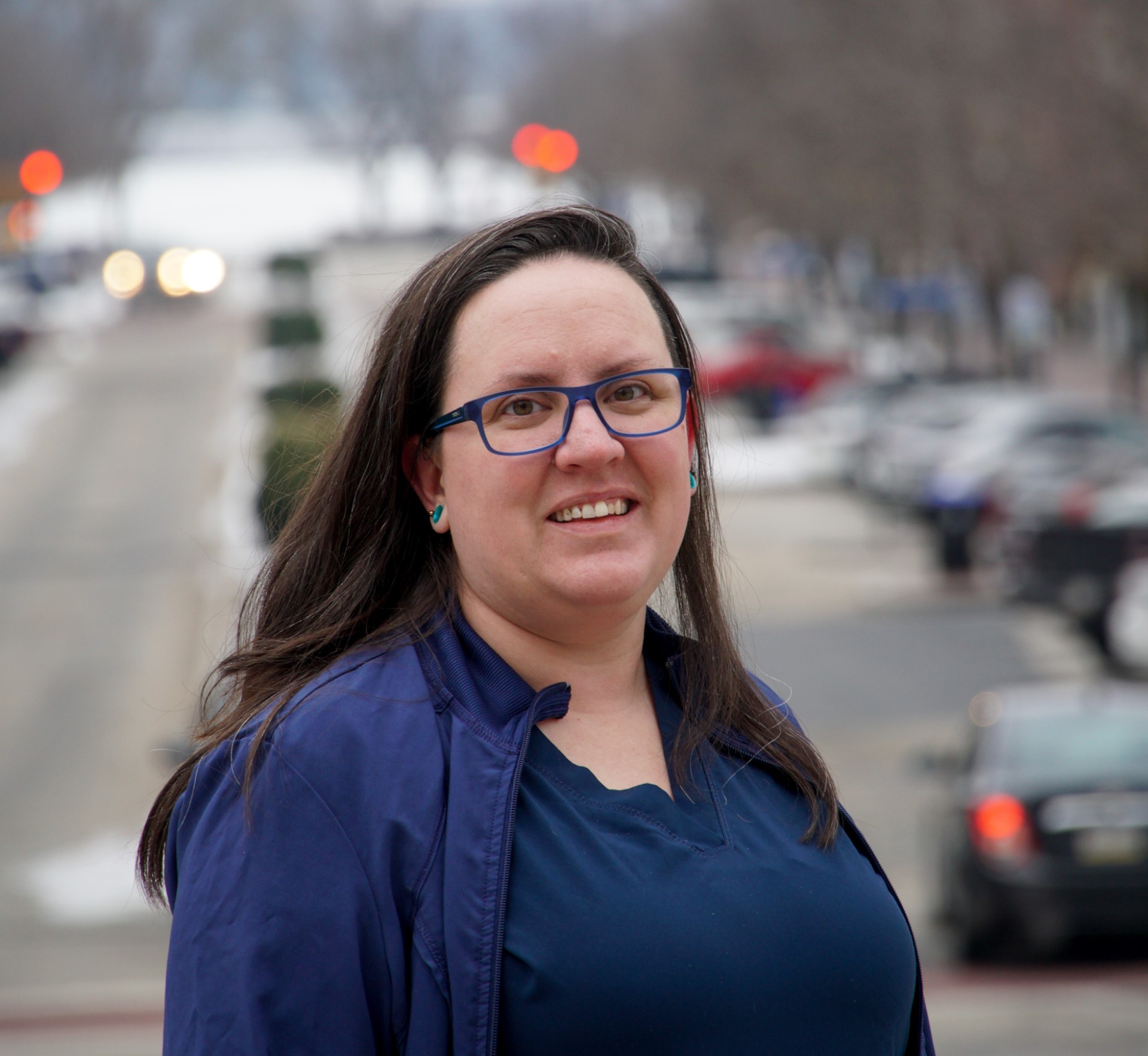 Debbie Vandover stands for a portrait outside the Pennsylvania state capitol Jan. 25, 2022. Vandover, a WellSpan Health travel nurse, came to the capitol to support a bill that would require patient staffing ratios.

Vandover is one of thousands of nurses in Pennsylvania who have left their jobs to work as travel nurses. While she works within the same health system that employed her as a staff nurse, many others work for private companies that contract with hospitals.

Hiring travel nurses is one way hospitals are responding to a desperate need for workers. Hospitals point to a number of long-term solutions for the staffing shortage, including more investment in education and retention, while several nurses’ unions are calling for legislation to increase staffing levels to prevent nurse burnout. Vandover’s story shows why some nurses are becoming “travelers” — and why some health systems say those other solutions are better in the long run.

Vandover had worked as a bedside staff nurse at WellSpan York Hospital since 2017. She recounted the pandemic’s early months, when people lined up to cheer on their “health care heroes.” And she recalled the first winter, when she witnessed more death than she’d seen throughout the first three years of her career. When vaccines became available last year, she volunteered to administer them, excited to do something that gave her hope.

Her hope faded when she realized that some people would turn vaccinations into a political weapon.

It got worse. Over the past year, it became common for Vandover to get angry calls or visits from family members, who demanded that their dying loved ones be given scientifically unsound treatments such as hydroxychloroquine or ivermectin.

In one instance, after a family member confronted her and another nurse, Vandover had to call security. She later learned the woman tried to re-enter the building.

The political speech and online misinformation fueling this behavior has only grown. Groups such as this one based in Lebanon regularly gather online to blame vaccinations, doctors and nurses — rather than the virus — for killing their loved ones. Earlier this month, WellSpan hired four York City Police officers to patrol its hospitals, citing threats to staff and an uptick in violence against health care workers. 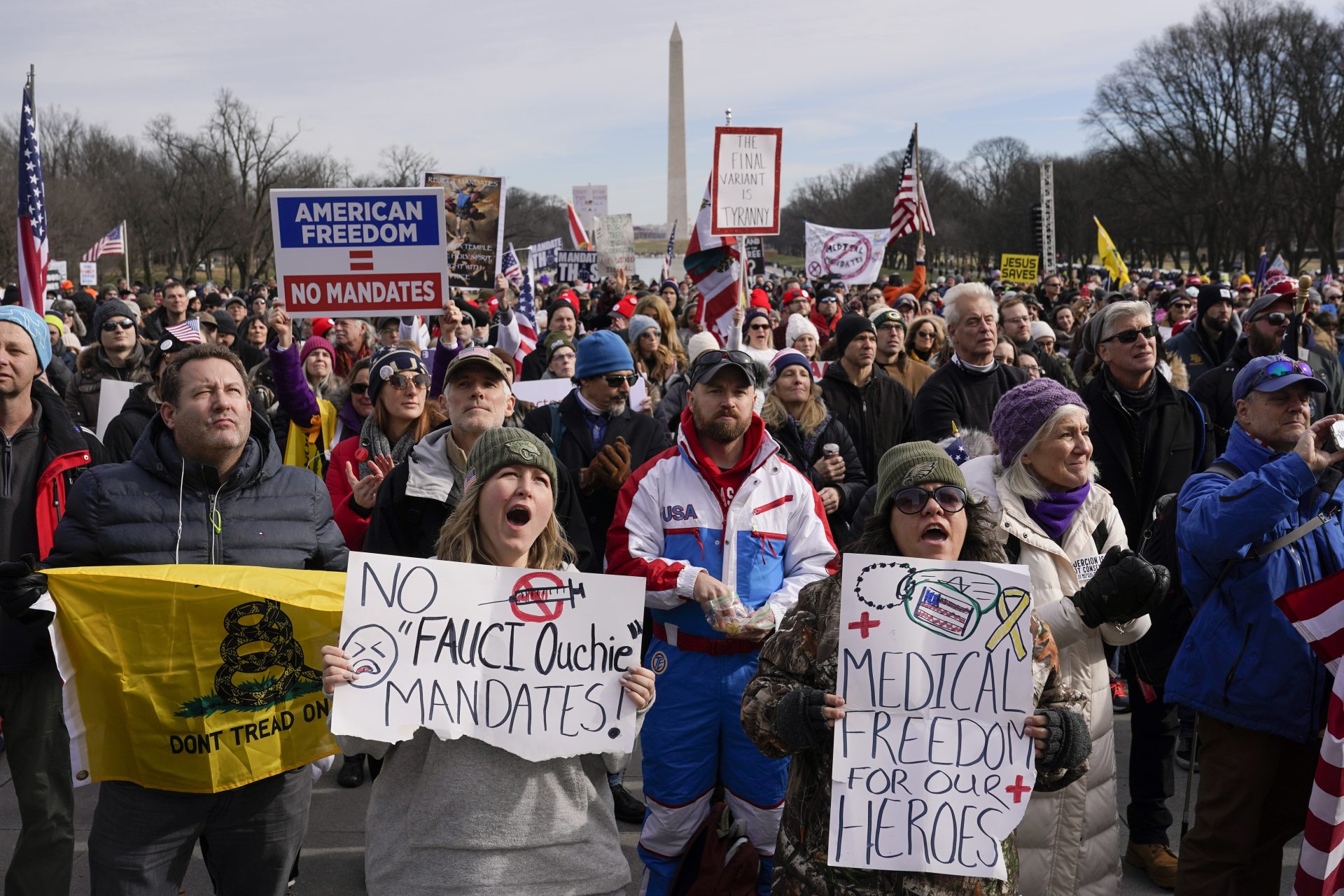 Protesters gather for an anti-vaccine rally in front of the Lincoln Memorial in Washington, Sunday, Jan. 23, 2022. (AP Photo/Patrick Semansky)

Like most hospitals, WellSpan York was short on nurses, and had been relying on staffing agencies to help. To Vandover, the travel nurses she met were making the best of a bad situation. They weren’t in charge, so they had less responsibility. They avoided the worst of hospital politics. And some of them earned as much as $100 an hour — nearly four times what she made.

The travel agencies have become so alluring for nurses that some Pennsylvania health systems have set up their own as a way to keep their employees. When WellSpan offered its own travel program — paying Vandover about $55 an hour to work at several hospitals in the region — she decided it was time for a change.

Staying with WellSpan meant that she wouldn’t lose her chance to have her student loan debt paid off in four years by the federal government. And working as a “traveler” means more money, no angry calls from patients’ families, and no evening texts from managers begging her to pick up overtime shifts.

“I used to pick up a lot of overtime and whatnot to make ends meet,” Vandover said. “And now with travel, I don’t have to do that. I can get home and I can just be at home and leave work at work.” 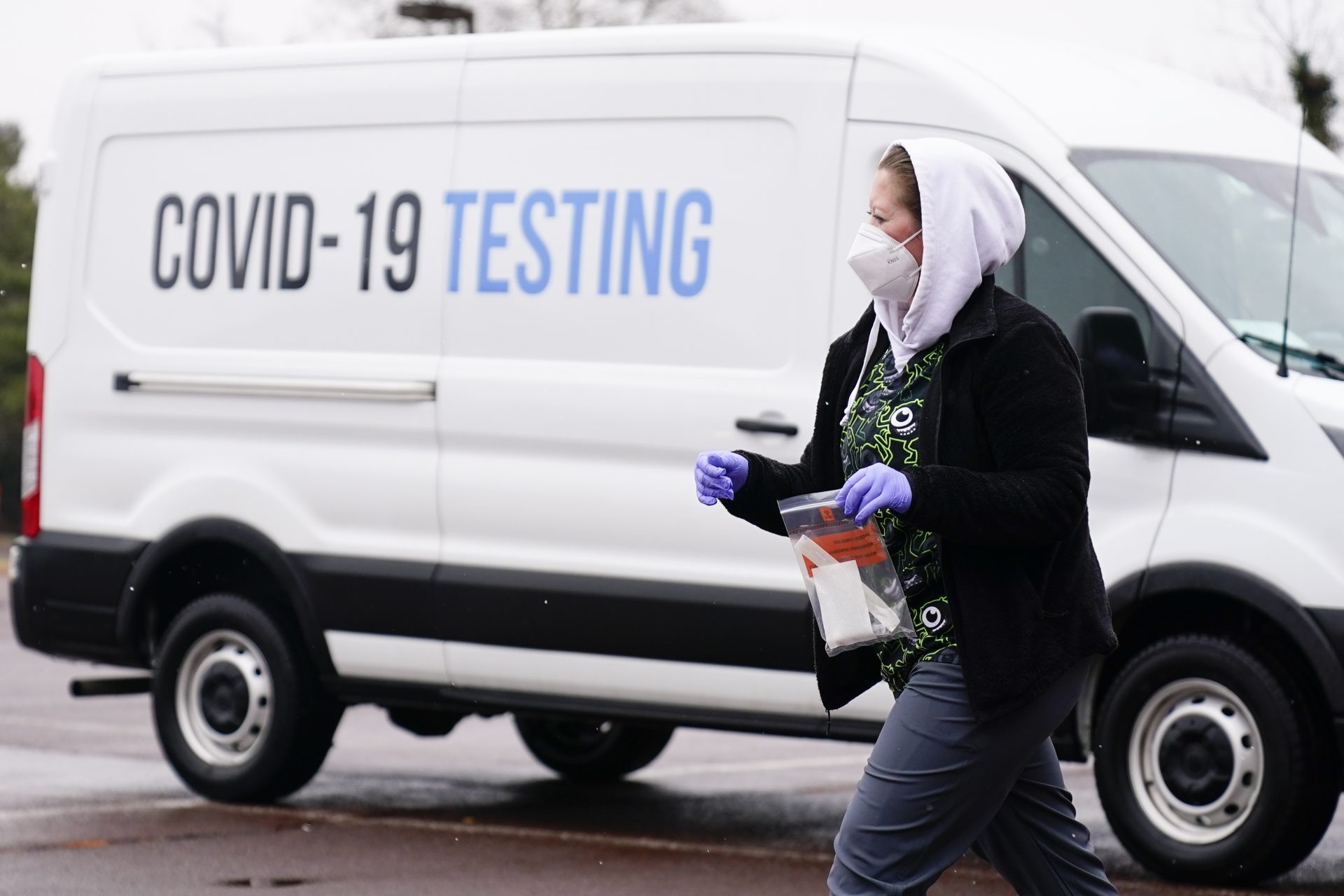 A healthcare worker walks over to a motorist to administer a free drive-thru COVID-19 test at a newly opened site in the parking lot of the Mercy Fitzgerald Hospital in Darby, Pa., Thursday, Jan. 20, 2022. (AP Photo/Matt Rourke)

How bad is it?

Across Pennsylvania, hospitals are missing about 27% of the registered nurses needed to provide direct patient care, according to a recent survey of more than 240 hospitals by the Hospital and Health System Association of Pennsylvania.

“This sudden increase in demand on hospitals would be challenging under any circumstances but is especially so given the ongoing staffing shortages,” said spokesman Liam Migdail. This has contributed to long emergency department wait times and some hospitals asking ambulance companies to “divert” sick people to other hospitals, he added.

Hospitals have responded by reducing services in other areas, assigning nurses to different units each day, and in some cases, by taking fewer patients, Migdail said. Several have gotten help from so-called “strike teams” of doctors, nurses and other health care experts who help out at hard-hit hospitals for a week or two.

Travel nurses have been one temporary solution to the massive staffing shortages, Migdail said, but according to the hospital executives surveyed, the staffing agencies are also a problem. He noted that in December, HAP sent a letter to Pennsylvania Democratic Attorney General Josh Shapiro, asking him to investigate nurse travel agencies for “price gouging.” 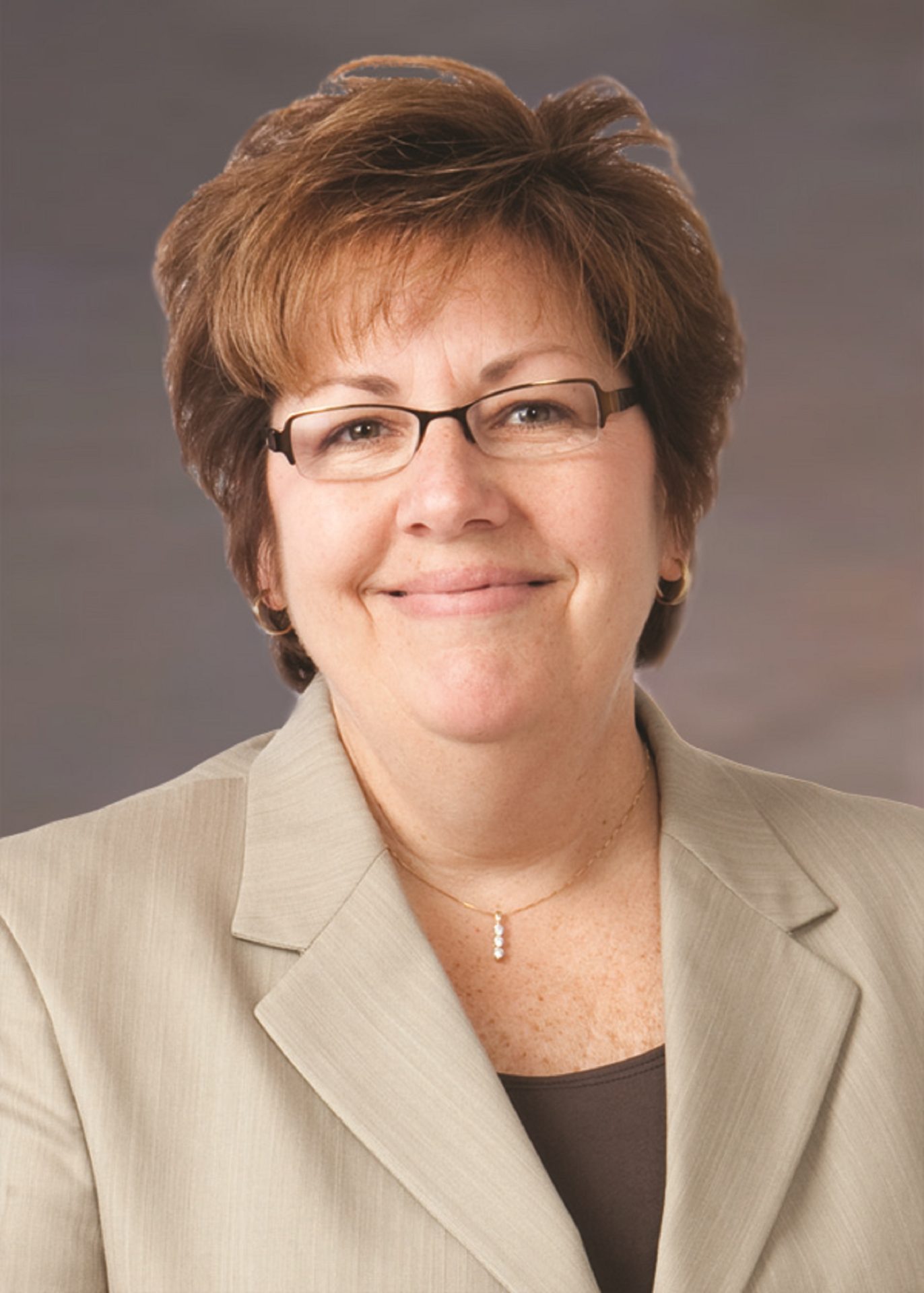 At Geisinger Health System, the high costs of paying agencies for nurses is unavoidable. The Danville-based health system would employ about 7,500 nurses if every position was filled, said Executive Vice President of Nursing Janet Tomcavage. Without travel nurses, its vacancy rate would be about 40% — a shortage of nearly 3,000 nurses.

With travel nurses, the Danville-based health system is able to lower the vacancy rate to about 20%.

“I’ve got 850 inpatient nurses positions posted,” Tomcavage said. “Prior to the pandemic that vacancy rate would have been in single digits.”

At Penn State Health, Chief Nursing Officer Michele Szkolnicki said the use of travel nurses has helped to reduce its vacancy rate to just under 20%. The Hershey-based health system employs up to 2,000 nurses and has 200 current job openings.

It’s been hard to compete with the travel agencies, Szkolnicki said. “The money is incredible. We have some nurses that wish to relieve their student debt by taking a couple traveler assignments.”

The travel nurse jobs have helped with staffing in the short-term, but Szkolnicki worries that it is also contributing to staffing issues.

Szkolnicki said the problem of nurse shortages is complicated. Even before the pandemic there was more demand for nurses than supply. She said health systems need to help “grow nurses early,” by investing in programs that begin in high school. And they need to do more to keep those nurses through incentives such as student loan repayment and retention bonuses.

“So we need to really look at growing our workforce, and rather just being on the receiving end of graduates, we need to actually participate in what it’s going to take to bring more nurses to the workforce.”

At Geisinger, Tomcavage said there are several factors causing the shortage: Not enough students are graduating from nursing school. There aren’t enough faculty to teach them — a problem she says is made worse by low faculty wages. In addition, there aren’t enough clinical rotations.

Meanwhile, the workforce is aging. She estimated that about 30% of nurses will retire in the next five years.

“So if we lose another million nurses, which is what’s projected, then we are in a tough way,” Tomcavage said.

For Vandover, the travel nurse, the problems go back to adequate staffing — which can determine whether patients get the care they need. One day after Vandover spoke to Transforming Health, she joined other nurses in Harrisburg to rally for the “Patient Safety Act.” The state House bill would mandate staffing ratios, which would require hospitals to hire more nurses. Two moderate Republicans sponsored the bill, which has more than a hundred co-signers.

The proposal has been in the House Health Committee since last February. Republican House Health Chair Kathy Rapp said if the bill was passed into law it would bankrupt rural hospitals that can’t afford to staff more nurses. Rapp said she does not plan to bring the bill up for a committee vote, effectively killing it.

Several nurse unions in Pennsylvania support the bill, saying that inadequate staffing is the top reason nurses say they’re burned out and plan to leave the field before retirement.

It may seem counterintuitive that you could solve a staffing problem by requiring more nurses. To understand it, Vandover said people need to understand that nurses are suffering from “moral injury” — a concept often used to describe the trauma soldiers feel after returning from war zones where they had to make difficult choices.

When nurses aren’t given the tools to help people, they see people die who they know could have been saved, Vandover said. Bearing witness to so much death — and being unable to do anything about it — leaves nurses with guilt, anxiety and trauma.

“We’re responsible for keeping them alive and giving them the best outcome possible,” Vandover said. “When we can’t do that, that’s pretty traumatic.”

As a note of disclosure, Transforming Health receives financial support from WellSpan Health.